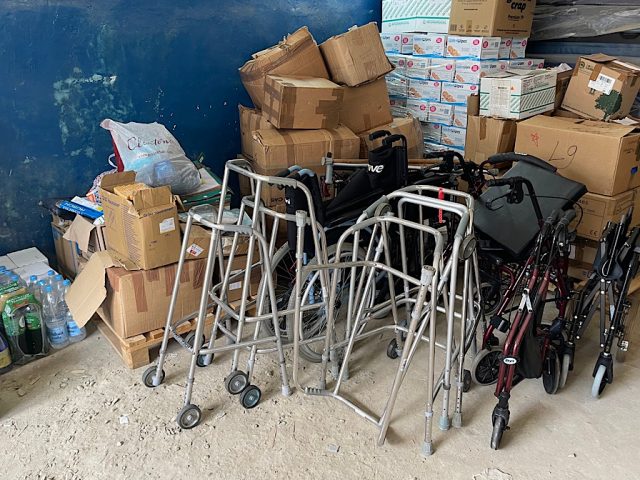 The Turvey villagers delivering humanitarian aid to Ukraine have returned from their third successful trip.

Rob Hammond and Alan Wallace departed for Ukraine on 26 May with a vehicle “loaded to the limits” with supplies.

They returned on 6 June, several days later than expected, having battled mass fuel shortages and a blown tyre.

All supplies were paid for using donations and funds raised from events and cake sales.

The team also collected aid, outside the Turvey war memorial, the Saturday before departing.

“Four batches of aid went straight to some British guys we are supporting on the front lines, including a vehicle radiator which was urgently needed to repair a 4×4 they were using as a frontline ambulance,” said Rob.

The radiator was a ‘time sensitive’ item as the frontliners had continued to use the vehicle despite the holes in the radiator.

“The day we arrived it failed completely. The ambulance was totally out of action and had been for two days,” Rob said.

But they ended up giving the “young lad”, sent to collect, more than the radiator.

“He had been let down in terms of fuel,” said Rob, “the nature of what he was doing took priority over our needs.”

So, they sacrificed their fuel drum so he could get the radiator back to the frontlines.

The makeshift facility, originally little more than an empty building, was repurposed by 70 year old volunteer Jean and “willing staff”.

Jean (surname omitted for anonymity) travelled from the UK to establish the ED.

No stranger to aid work, she was an agency worker in the UK throughout the pandemic, saving enough money to subsidise her Ukraine trip.

She is currently trying to source more equipment to get the ED.

Jean assured the team all the items they brought would be put to good use.

Some would be distributed to other organisations as there are parts of Ukraine where medical care is not freely available.

She said, due to the ongoing conflict, lots of people with ongoing medical issues cannot afford items such as walking frames.

Jean is currently trying to source more equipment for the ED fully functioning.

Rob feels that, despite there being, “less coverage in the news (about the war) than at the beginning of the conflict, it does seem like the situation is getting worse.”

He said: “they (Ukrainins) really do need our continued support.”

The team are already planning their fourth trip, getting a list together of what is needed.

They are looking to fund another 4×4 with enough space for a stretcher and additional kit.

Incidentally the 4×4 ambulance, they previously raised funds for, has rescued several people.

“Subject to funding, we will continue to deliver what they (Ukrainians) need, directly to the places it is needed.”