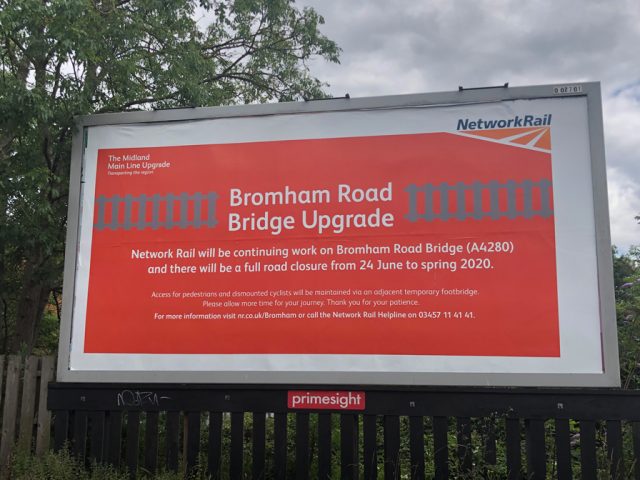 Network Rail’s closure of Bromham Road Bridge is doubly hard to stomach. Not only will it continue to cause disruption until they complete the bridge replacement next spring, we don’t even have the consolation of an improved rail service after it has finished.

In fact, the decision by the government to remove Bedford from the intercity rail network under the next East Midlands franchise means we are actually set for a worse service.

So there’s no sugar-coating the disruption being caused by these works. However, the Council is monitoring traffic levels across the town on an ongoing basis and will of course take actions to cut congestion where possible.

I know what a big impact road congestion can have on people’s everyday lives, whether at home or work or both. That’s why we’re taking action via our Transporting Bedford 2020 project to cut it.

This represents the biggest ever investment in our roads, and sees works designed to cut congestion taking place at traffic hotspots across Bedford.

The grant money we won for this project has to be spent by April 2021, and with numerous major works planned to get traffic moving, we have to crack on with them.

The next works beginning under this programme are at Britannia Road, by the hospital.

To minimise disruption, we are not starting this work until the school summer holidays. During the works, Britannia Road itself will be closed northbound, but the work will bring clear benefits when completed in early 2020.

The series of measures to cut queues include road widening, upgraded traffic lights, changes to the road layout and more.

We’ve also worked closely with the Hospital, which is making changes regarding the layout and entrances to its car parks intended to improve traffic flow in the area.

It’s an example of how we are working with others to maximise the benefits achieved through this project.

Other schemes include works at notorious locations for congestion such as Cow Bridge to the South of the town to Manton Lane/Clapham Road to the north.

We are waiting until Network Rail’s Bromham Road Bridge works are finished before working on Clapham Road itself, to avoid further delays on the diversion route.

There’s no avoiding some disruption while works are happening, of course.

Although at least in the case of Transporting Bedford 2020 there are clear improvements to look forward to when they are all over.