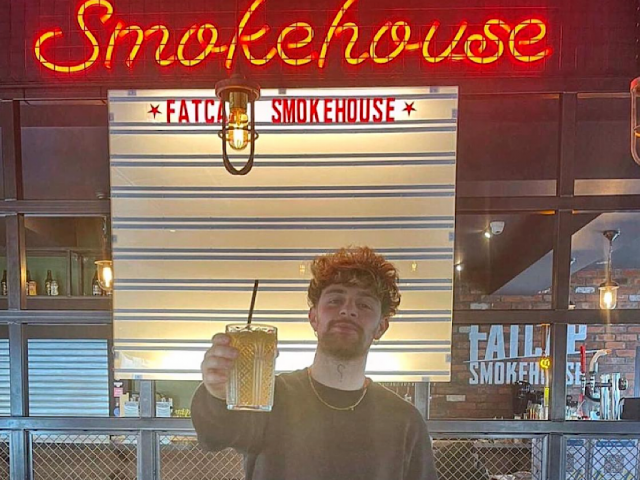 Local legend, Tom Grennan, was back in Bedford for the bank holiday weekend and made time to sample a cocktail with his name on it.

FatCap Smokehouse on Castle Lane added the Tom Grennan – a bourbon cocktail with lemon and soda – to their bar menu just before the singer released his latest chart-topping album, Evering Road.

“Around the launch of his album, Tom was talking a lot about his hometown of Bedford and supporting local, so we got in touch to ask him if we could name a drink in his honour,” said FatCap Smokehouse owner, Emma Stevens.

Over the bank holiday weekend, Tom and his family had dinner on the restaurant’s terrace while taking the opportunity to sample his namesake tipple.

“He said he loved the cocktail and had a great time here with his family,” confirmed Emma.

FatCap Smokehouse, along with other restaurants and bars in England, has been able to trade – outside only – since the relaxation of lockdown rules on 12 April.

“Business is booming and we’re overwhelmed with the support we’ve received,” said Emma. “We’ve been fully booked most nights which is amazing given people can only sit outside.

“We’re taking bookings for once we can reopen inside – from 17 May – and can’t wait to get people back in so they can get the full FatCap experience – we’ve got plans for live music and DJs throughout the summer and our awesome manager Joey brings tonnes of experience after managing Blues Kitchen in Shoreditch Camden & Brixton.”

Tom Grennan will be performing six intimate sold-out gigs at Bedford Esquires this summer to thank his loyal fans for their support.

The shows were announced to coincide with the launch of the Evering Road LP, which reached number one in the official album chart.

The former St Thomas More pupil also returned to his old school to host a masterclass with students.