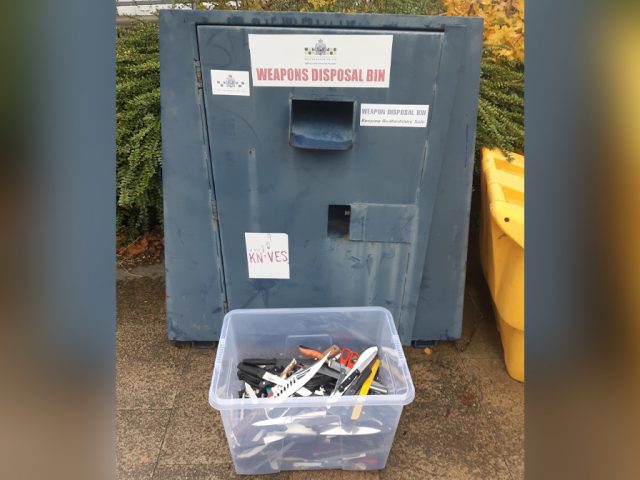 1,345 knives and seven firearms have been surrendered to Bedfordshire police across North Bedfordshire (Bedford Borough and Shefford) as part of county-wide efforts to tackle knife crime.

11 weapons bins were emptied across Bedfordshire as part of a week of action between 15 and 21 November.

Across the county, the bins were emptied with 2,457 blades and 10 firearms recovered. Being emptied again at the end of the week, a further 181 knives had been surrendered.

This year saw a 17 per cent increase in the number of weapons being surrendered compared to the same figures in November 2020, with almost 600 more knives being recovered.

After being reviewed by officers to see if they have been used in any criminal acts, the weapons will be destroyed.

Detective Chief Inspector Aaron Kiff said: “This week of action against knife crime provided us with an opportunity to dedicate resources from across the force to tackling an important issue and one we know our communities are really concerned about.

“It’s clearly positive that so many knives and weapons were handed in and no longer pose a threat in Bedfordshire.

“However, the weapons bins are just one aspect of the work taking place across the county and we know that policing cannot do it alone when it comes to tackling issues related to knife crime.

Throughout the week officers carried out weapons sweeps in parks, patrols in areas known to be crime hotspots, and educational talks at schools and businesses to encourage young people to think twice before carrying a knife.

Officers also visited a number of retailers which sell knives.

They gave guidance to staff members on the dangers of knives being purchased for criminal purposes, such as information on the age requirements for purchasing a knife.

Young people from the Bedford Borough Youth Cabinet and the Central Bedfordshire Youth Parliament also took part in a social media takeover through their #KnifeFreeBedfordshire campaign.

There has been a fall in recorded incidents of serious youth violence in Bedfordshire.

Even so, police say while motivations for carrying a knife can vary, those who carry a knife are significantly more likely to be a victim of knife crime.

The pandemic has played a big part in a drop of this scale,

“A vitally important aspect of the work taking place is the education and training being provided alongside charities, schools, the retail industry and many other partners, to ensure that the true impact and dangerous of knife crime are understood across society,” added DCI Kiff.

“My big ask from the public is for them to let us know if they suspect someone is carrying a knife, whether this is with the intention of using it or if they’re under the false impression that it will protect them.

“It won’t; and in fact, they are far more likely to become a victim themselves.”

To report concerns about knife crime, got to Bedfordshire Police’s online reporting centre or call police on 101.

You can also call the independent charity Crimestoppers anonymously on 0800 555 111. They will never ask for your name or try to trace the number that you’re calling from.

In an emergency always dial 999.

If you have a knife and want to get rid of it, talk to an adult who you trust and find out more about where you can get help.

For more information or support about getting out of a gang, please visit the Bedfordshire Violence and Exploitation Reduction Unit’s website.

You can also find more support and advice through VERU.