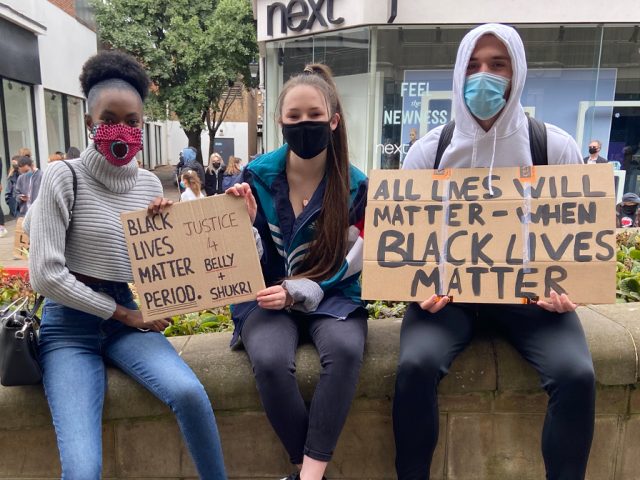 A third Black Lives Matter (BLM) protest has been organised to take place in Russell Park this weekend with organisers saying they want the gathering to focus on “peace and unity”.

The event is due to take place at 2pm in Russell Park, along Bedford’s Embankment, on Saturday, 13 June.

The protest will follow similar events already held in Bedford Town Centre and Bedford Park where people were given a chance to share their own experiences of racism.

“A very important part of Saturday’s protest is hearing about other people’s experiences and how racism and discrimination has effected their lives,” said organiser Elise Patterson.

“It’s important to hear other people’s stories to understand how it can effect people.”

After giving people a chance to speak, attendees will also be able to take a knee and “in solidarity together as a town and community,” the 15-year-old orgniser added.

Russell Park has been chosen as a venue to allow for more social distance space.

The first recent BLM protest in Bedford took place in Bedford Park with social distancing observed by almost all attendees.

Organisers continue to urge everyone attending to wear masks and protest in peace.

Spectacularts distances itself from protests

Meanwhile, the organisers of Bedford Spectacularts, an organisation set up to celebrate Bedford’s diversity, has distanced itself from the protests.

In a statement they said, “We are committed and focussed on the Black Lives Matter movement and currently planning how best to effectively support this important cause and our community in the long term.

“We acknowledge that protest is key to keeping alive the message that Black Lives Matter but we also acknowledge that Bedford has the highest cases of Covid 19 within the Bedfordshire area and that the BAME community is most at risk.”

Despite this, Spectacularts has reiterated its commitment to the BAME communities of Bedford and beyond and the Black Lives Matter movement.

“We need to keep the message that black lives matter at the forefront and SpectaculArts are making use of this time to plan and play smart and will join protests when it’s safer to do so,” they added.

On 13 June, Spectacularts removed their original statement and posted the one below. The only change was a removal of the Legacy of Windrush Descendants logo

Black Lives Matters protests have continued across the world in the wake of the killing of George Floyd in Minneapolis, USA on 25 May.

Four former police officers have been charged in connection with his death.