They say the sun shines on the righteous, so it’s only apt that after a day of unpredictable weather, the clouds parted as Bedford’s conquering hero returned to his sell-out hometown gig last night (Saturday).

With fans queuing round the park before the gates opened at 5.30pm, eager Tom Grennan fans dashed to be first in and at the front of the stage.

The mini-festival began with sets from Eden Hunter, Ella Eyre (who was helicoptered straight from Bedford to Buckingham Palace for the Jubilee concert) and two of Bedford’s most beloved homegrown bands, The Scruff and The Wholls.

He went straight into his opening number (If Only) before taking stock of the crowd and telling the audience, “I’m so proud of being from this little town; the music scene, the people, the community.

“We’ve sold out this whole town. This is crazy.”

The entire evening definitely felt like a celebration of community and to be sharing a field with thousands of people with a love and pride for this hometown success-story was something very special.

“It was an incredible evening and a celebration not only of Tom’s success but of the town,” said Gareth Barber, owner of Esquires music venue where Tom played his first gigs and last year held a sold-out residency.

“His journey should be an inspiration to any young kid who was in the audience and might one day want to pick up an instrument.

“I’m just very proud of him and his achievements, as everyone connected to Esquires or live music in this town is.”

A huge amount of credit must go to Mark Harrison and the Bedford Park Concerts team who created an incredible festival atmosphere for the weekend – from the bunting be-decked Green Room to the food stalls and glitter bars.

The staging was excellent and it was a beautiful addition to see two BSL interpretors at the side of the stage. They definitely matched Tom’s energy and enthusiasm to share this lyrics with the crowd.

The pyrotechnics certainly added a frisson of danger, with Tom leaping back when they were first deployed saying, “I thought I was going to lose my eyebrows then. I’m not gonna lie!”

With some acts, you can definitely feel a shift throughout the performance as the more well-known tunes are rolled out and the audience moves up a gear. However, last night it felt as if the same positive energy was flowing from the first note Tom sang until the end of the encore. We certainly didn’t stop singing, dancing, jumping and clapping for his 90 minute set. 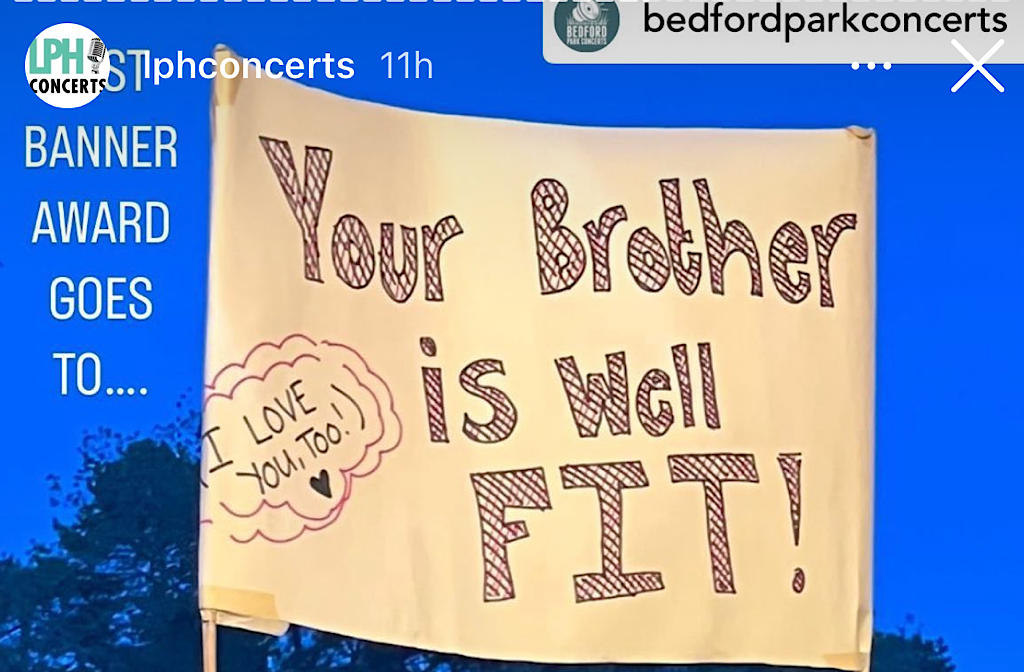 At every break between songs he took the opportunity to thank the crowd and the town for their support and to show his gratitude for being in such a privileged position.

“I played football in this park,” he said. “I feel so proud to be standing here now.”

“What you see is what you get with Tom,” she told the Bedford Independent. “He’s talented beyond measure, humble and having the time of his life doing what he loves and taking us all on the magical ride with him.

“The best part about last night for me was seeing the audience made up of a  range of ages singing his lyrics and chanting his name from toddlers to elderly members of our community.

“It is quite surreal to think this was a Bedford lad who taught himself to sing and play the guitar at the age of 17 and just went for it.

“He was that lad many of you would have walked past whilst he was busking outside The Body Shop all those years ago.

“Thank you Tom for letting us be a special part of your magical journey. Bedford is very proud!”

As the evening drew to an end he told the audience that he’d see them at the Rose til close, and judging by the numbers of people heading down D’Parys Avenue, it looked like plenty of people had taken him up on his offer.

And in Tom’s words: “I love this town, I love this community. Bedford is not shit.”< We couldn't agree more. If you couldn't be there last night, or just need a reminder of the setlist:

Previous articleInterview: “It’s going to be emotional” says Tom Grennan ahead of sold out Bedford Park show
Next articleBBC Music Introducing stage is searching for local talent to perform at Bedford River Festival