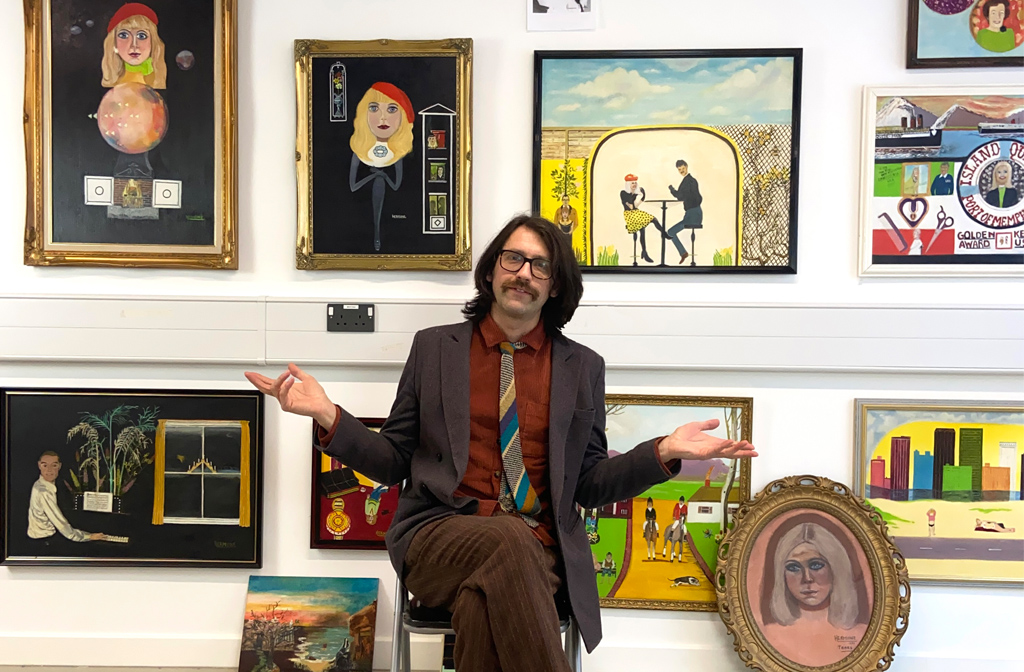 Artist Andy Holden is making a film about and staging an exhibition of paintings by a previously unknown painter from the town – and he’s asking for the help of his fellow Bedfordians.

Andy, a Queen’s Park-based artist who has previously exhibited at Tate Britain and recently curated the exhibition Beano: Art of Breaking the Rules, discovered the paintings of Hermione Burton in various charity shops in Bedford.

After finding the first in the former Reuse Centre, he found others at Emmaus and now has around 32.

He was immediately struck by the paintings and realised that together they told the story of the artist’s life, her travels and her battle with a severe heart condition.

He also found a copy of her book ‘Hermione Burton: A Journey Through the Paintings’, and used this to track down many of the local people that had known her.

After staging a small exhibition of her work at his Ex Baldessarre gallery in Queen’s Park Bedford – visited by many including Jarvis Cocker – Andy felt that Hermione’s story and paintings should be seen by a wider audience.

And he’s hoping that owners of the missing work by Hermione will get in touch to contribute their paintings to the exhibition.

“It’s become a kind of treasure hunt and I guess there must be at least half a dozen more of her paintings in and around Bedford which we’d love to include in the exhibition,” said Andy, who found his most recent Hermione painting just a couple of weeks ago.

“Also if anyone remembers Hermione and would be interested in contributing to our film, I’d love to hear from you.”

The film will feature Sarah Cracknell from the band Saint Etienne as the voice of Hermione, and the soundtrack will showcase new music from the band.

Through interviews with people who knew Hermione and who feature in the paintings, the documentary will show how the charity shop discoveries together tell a deeply personal story of an ‘outsider’ artist who felt compelled to record her life through art.

The exhibition is currently planned to be part of the British Art Show in Manchester in May and then travel to Northampton’s NN gallery in the Autumn.

“Hopefully the film about Hermione and the paintings will then be shown back in Bedford at a later date,” said Andy.

“It’s very rare to find the whole story about an artist all at once and no one has ever found anything like this in our region before.

“For the documentary, we’ve managed to track down pretty much everyone Hermione painted and spoken to lots of people that knew her when she lived and worked in Bedford.

“It would be great to be able to complete the collection with the missing paintings. Please do get in touch if you think you might have one.”

Anyone with a painting or memories of Hermione Burton is asked to email Andy Holden at holdenstudio@gmail.com.