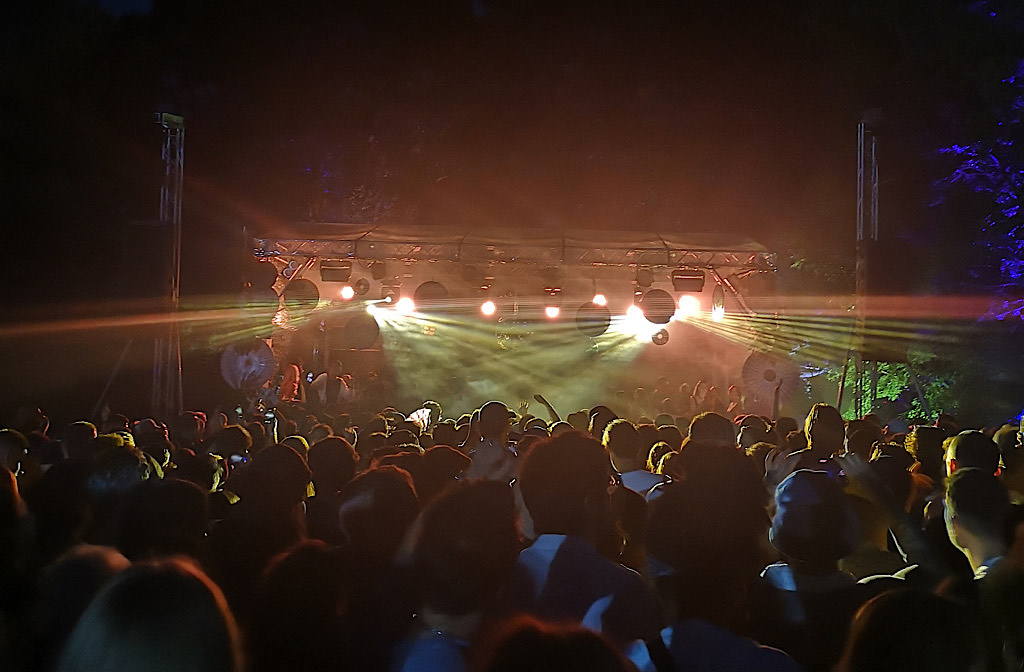 Excellently managed and well-executed, the now finely-tuned day-rave formula in venues such as London’s Printworks and The Drumsheds has been put to good use here in the countryside, just a stone’s throw from Bedford.

Arriving on Saturday (18 September) at a drop-off only location, nestled away in the grounds of country estate Tofte Manor, Sharnbrook is Bedfordshire’s newest dance festival presented by Labyrinth Events.

From the entrance, you head up the hill where you get a wonderful view of the country house on the right. On Saturday, visitors were greeted with a colourful audience, dressed for the occasion, and the sounds of deep house beats from the closest music stage.

The first area you reach is an arena of food and drink with a sociable set-up full of hand-sawn wooden tables, benches and bars. A highlight was The Alpine Pizza Company, with fresh wood-fired pizza.

The smaller Tom Dixon-designed stage is a colourful paradise, with a beautiful metalwork sculpture set in the middle of the dance area.

The brief was to “explore the relationship between music, design and art”, and enable the audience to move around it. I can confirm, it works.

The event kicked off with a three hour set from DJ and promoter behind Labyrinth events, Nick Caslteman.

I should also mention that it was heartening to see an all-female identifying line-up after Nick’s opening set on the stage.

Past the Tom Dixon Stage was the larger Labyrinth stage – turn behind you and you had awesome views across the sun strewn countryside and crowds could get a good viewpoint from what could be called the chill out mound!

Beyond the crowds there was a disco ball strewn chill out area with bright tassels hanging from the trees. The perfect place to rest legs between sets.

The stage was strewn with eye-catching circular discs and the sound quality was on point considering this is an outdoor event.

In order, Alex Medina, Jimi Jules, TSHA (Teisha Matthews – watch out for her EP Flowers release on Ninja Tune in October) and Trikk (Bruno Deodato) saw out the daylight with a mixture of hypnotic electro, techno and underground gems that kept the crowd coming back for more.

Jennifer Cardini, a DJ known for electro/techno fusion sets who made her name in Paris, hit the stage at around 17:30 and grew the crowd almost immediately. The sun was setting and the excellent laser display began to take shape. Her set was the perfect high-octane intro for what was to come next: an epic three hour set from Kristian Beyer of Âme, playing b2b with Dixon.

They played the crowd like puppet masters of their trade, oscillating between deep house and heavy techno with a more compositional approach that kept everyone on the edge for the full set. It will probably go down as one for the canon of all-time greats.

Already the crowds were treated to an all-star line-up for the day, but the fact we had two of the biggest DJ names currently in the world headlining, right here in Sharnbrook was a proud moment.

The majority of the crowd seemed to have arrived via coach, or train and coach from London so the bar was set high. If the amount of dancing and atmosphere was anything to go by, for sure it was a success.

The festival is small in comparison to most, but perfectly formed with high calibre artists. Let’s hope this run continues next year as it’s an excellent asset for Bedfordshire and puts us firmly on the map.