A Queen’s Park-based artist has brought the iconic Beano comic to life at a new exhibition at Somerset House in London.

Beano: the art of breaking the rules has been curated by artist, Andy Holden, who has a studio in Queen’s Park. For the life-long Beano fan, it was a dream come true to bring together original comic artwork from the Beano archive alongside other contributors including Banksy, Gilbert & George, Nick Park and Phyllida Barlow.

“I wanted to tell the story of the Beano that hadn’t been told before,” Andy told the Bedford Independent.

“The exhibition is about tracing the hidden cultural influence of the Beano along the themes of mild anarchy, rebellion and disrupting the scenario.

“During Covid, it was an interesting time to think about rule-breaking.” 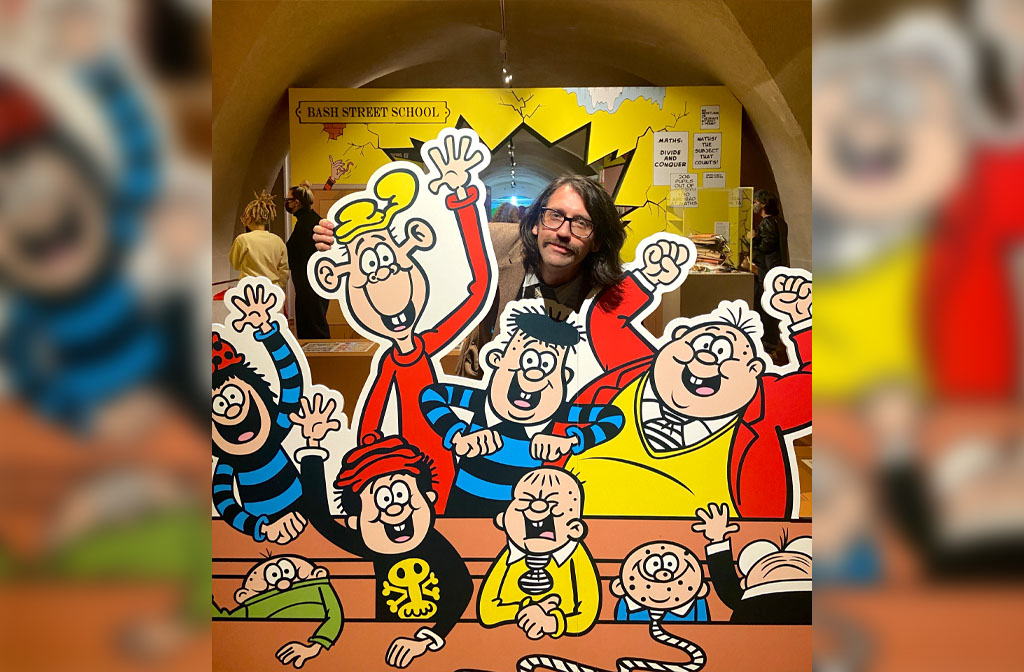 The exhibition allows visitors to step into the pages of the comic and take a trip into Beanotown to explore how this beloved icon of British comics has fired up successive generations to break the rules, while discovering artists who push boundaries in their own original and wonderful ways.

“The challenge was to create an exhibition that would appeal an eight-year-old Beano reader, but also to traditional Somerset House visitors and long-time Beano fans,” said Andy.

You’ll come face-to-face with the Beano gang – including Dennis and Gnasher, Minnie the Minx, Bananaman and the Bash Street Kids – through original comic artwork and amazing artefacts, plundered from the Beano’s archive.

Sculptor and former Bedford Modern student, Alex Chinneck and author, illustrator and Bedfordian, David Litchfield have both contributed to the exhibition.

Alex’s playful pillar box, tied in a knot features in the exhibition, while David Litchfield’s Lowry-inspired piece is the first thing visitors see as they enter.

“I love the Beano and read it every week when I was a youngster,” said artist, author and Bedfordian, David Litchfield.

“About six or seven years ago I was commissioned to draw some images for the comic which I couldn’t believe. In fact, they were some of my first proper jobs as an illustrator.

“I actually only found out a few days ago that it was being used in this great show at Somerset House. When Andy told me I was very happy. I can’t wait to go and see it hanging next to all of that great art created by some of my illustration heroes.””

Saint Etienne’s Bob Stanely has filled up a bespoke jukebox with music inspired by the rebelliousness of the Beano, and visitors can choose their own tracks as a playlist to their visit.

Closer to home, Andy has been working with residents of Queen’s Park as part of Bedford Creative Arts’ Take Part Queen’s Park project.

He is collaborating with residents and fellow artist, Mira Calix, to create a permanent mural in the area.

“Andy has invited residents to question the word community itself – exploring the connection it has to the words communication and unity and to think about how an artwork could take shape that represents those things in a permanent mural in the ward.

“Over the next few weeks and months we’ll be exploring this idea with residents, so do keep an eye on our website for more details as Andy makes it take shape with fellow artist and Queen’s Park resident, Mira Calix.”

You can find out more about Take Part Queen’s Park here.

To book tickets to Beano: the art of breaking the rules, visit the Somerset House website here.