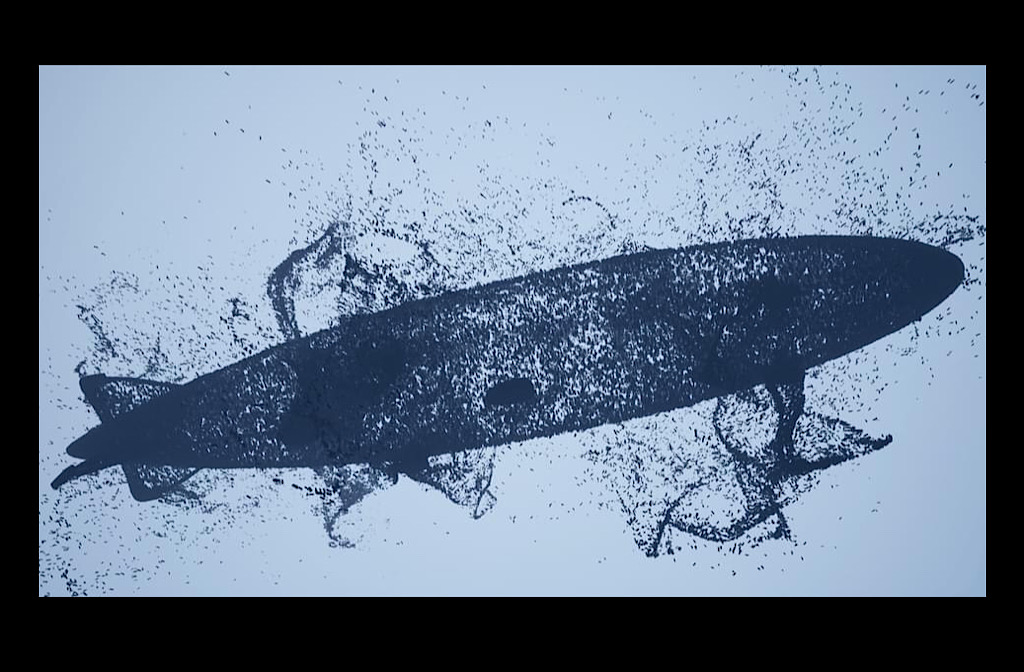 An immersive audio-visual experience imagining the feeling of travelling on the R101 is just part of an exciting series of new exhibitions exploring Bedford’s connection with airships.

Recreating a drifty and dreamy sensation like sailing through space, Airship Dreams: Escaping Gravity opens at the Higgins Bedford this July.

The exhibition explores a fascination with airships and the human desire for progress, adventure and the unknown.

Escaping Gravity has been commissioned by Bedford Creative Arts (BCA) in partnership with the Higgins Bedford and the Airship Heritage Trust (AHT). It forms part of Airship Dreams, a place-making project exploring Bedford’s identity as the historical centre of the UK’s airship industry, past and present.

Artist Mike Stubbs worked over three years getting to know the community and the history that has inspired the artwork alongside a community exhibition in the Connections Gallery all about Bedford’s Airship history.

In the 1920s the airship was considered the future of aviation and Bedford’s role as the UK’s global airship hub seemed certain.

The giant Cardington Sheds, just outside Bedford, were home to the R101, which at the time was the largest airship being developed.

However, the ambitious Air Minister, Lord Thomson, determined the airship should sail before it was fully ready and on the night of 4 October 1930 (90 years ago), the R101 crashed on its way to Karachi. 48 men died, including Lord Thomson. It was the end of the UK’s airship programme and Bedford’s airship dreams.

Artist Mike Stubbs – who grew up in the shadow of the vast Cardington Sheds –  along with collaborator Dave Lynch, delivered a week-long workshop in Bedford Library in 2019.

They invited local people to share their stories and experiences of Cardington and the airships, directly inspiring the artwork.

Bedfordshire resident Den Burchmore worked at RAF Cardington Camp and was the curator of the Airship Heritage Trust collection.

When Den retired, he enjoyed sharing his personal collection of airship memorabilia that he had gathered in his garden shed. Mike Stubbs has captured Den’s personal story and students from Bedford College are animating excerpts of his oral history as part of the exhibition.

Dr Sita Thomas from Channel 5’s Milkshake! has been the ‘Community Champion’, developing a series of educational videos about Cardington and airships across art, craft, storytelling, literature and science.

BCA has also been working with Shortstown Primary School and local artists to explore questions such as ‘Should the people of Bedford be proud of the R101?’ and ‘Is it true that what goes up must come down?’.

BCA and AHT have created a short documentary on Cardington and interviewed some of their members to explore some of the lesser-known stories of Cardington. There will be an online collection available on Historypin.

Audiences at the museum will experience an audio-visual immersive artwork and a newly composed symphony that rises and falls as a metaphor for the life of the R101 airship.

The film is created in Unreal Engine, the gaming software that Fortnite is built on.

Audiences enter a sculptural space, with the video projection filling one wall of the gallery. Choral voices combine with audio reminiscent of airship engines and wind, creating a mythical and meditative journey, as though sailing through an imaginary space on the R101.

Lead artist, Mike Stubbs, said: “I have always been fascinated by Cardington Sheds and Bedford’s role in aviation and innovation history.

“I met Den Burchmore who had created a small airship collection in his garden shed. It was so inspiring seeing his treasures and hearing his stories. Then as we made the work during lockdown, it took on the expanse, hope and optimism the airship pioneers were looking for.

“And then it became less about the R101 and more about escaping, into other worlds, escaping gravity.”

Elaine Midgley, director of BCA, said that the government of the 1920s had a dream that Cardington was going to be the “Heathrow” of the airship.

“Were it not for the folly of men, Bedford could still be the global centre of luxury, carbon-neutral transport today,” she said.

“History can teach and inspire us, and that’s what we wanted to do with this project in a non-traditional way – we wanted to pull out the themes, human connection and passion in a fresh, contemporary way.

“The Cardington story is a powerful reminder that Bedford is a town of innovation, daring feats of engineering, imagination and dreams. We have created this exhibition to offer local people a chance to be proud of Bedford, and perhaps more importantly, inspired to continue the dream of Bedford, as Bedford: the Home of the Airship.”

The exhibition remembers the carpenters, engineers and riggers like Harold Rowe and George Cooke who built and flew on R33, R38 and R101. Also featured are people like Miss Cochrane Foster who worked in the Fabric Shop and made the outer cover and gasbags for the airships, as well as those that survived the R101 crash including the story of Mr John Binks shared by his son Derek.

The exhibitions open on Saturday 10 July to the public and visitors can find out more information from the museum website.

Previous articleBedford Clanger: Bedford’s arts and culture guide gets a fresh new look
Next articleBedford artist who was a victim of Peter Sutcliffe, highlights imbalance of justice