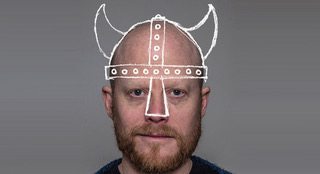 Kick off the new year at the theatre. Here’s our January round-up by Paula Walker.

Seth Kriebel’s Beowulf is a performance-game that invites audience members to explore the world of this legendary story… without leaving their seats.

Harking back to Beowulf’s roots in the oral storytelling tradition, the show is technically simple: Seth stands on a bare stage and describes a frozen world of Vikings and monsters – the world of Beowulf. The audience offers instructions like ‘follow the path’ or ‘pick up the axe’ to move through the described, imagined places… working together to overcome obstacles, fight foes and navigate the narrative of the original English story of man versus monster.

Accompanied by an evocative soundscape, the audience is immersed in the world of the poem, a millennium after the Viking hero’s adventures were first written down. Each show is unique, dependent on the audience’s choices — bringing the world of the ancient epic to life with a new immediacy.

Deep in the remote snowy forest, an icy wind blows and snowflakes fall from the sky. Doris and her Bear Man live on the hill, alone but happy. Wrapped up in a snowy smother, they are in love, but when the snowstorm comes, Bear Man disappears! How will Doris survive by herself in a forest plagued with bad weather and a cloud of hungry crows?

The Snow Baby, magical children’s theatre with beautiful puppetry, imaginative storytelling and music that will give you goosebumps, this gentle show explores family, love and loss, with music, confetti and fun for the whole family to enjoy!

Rachel (a play in full mask)

Mrs Rachel Levy is a survivor of Bergen Belsen Concentration Camp, the worst camp attributed to a time when the Nazis had seemingly given up trying to hide the horrors of the Holocaust. All hope was gone, but Rachel survived. ‘It was a miracle!’ she said.

This play is for school groups, but Small Nose Productions believe the lessons of the Holocaust are for us all.

The Quarry Theatre at St Luke’s

The Tragedy of King Richard II

Simon Russell Beale plays William Shakespeare’s Richard II, broadcast live from the stage of the Almeida Theatre in London. This visceral new production about the limits of power, is directed by Joe Hill-Gibbins, whose previous plays include Little Revolution at the Almeida and Absolute Hell at the National Theatre.

Richard II, King of England, is irresponsible, foolish and vain. His weak leadership sends his kingdom into disarray and his court into uproar. Seeing no other option but to seize power, the ambitious Bolingbroke challenges the throne and the king’s divine right to rule.

What a great start to the Resident Review writers initiative started at The Place Theatre last season. Huge thanks to Isabelle Brazier and Kezia-Rose Johnston for contributing such great reviews of their experiences. Their writing added an extra layer of connectivity to The Place’s work and gave young people some local representation.

Three (yes THREE!) new reviewers will be chosen for the January to April season from the age groups 9-12, 13-16, 17-25, and winners will be announced on The Place’s social media platforms as well as The Clanger’s blog to coincide with The Place’s season launch on Thursday 10th January.  All reviews will be published on The Clanger blog and across The Place’s platforms, and the March and April edition of The Clanger will feature some of the best reviews.

Excitingly, the Frank Branston Trust has agreed to fund this initiative as it moves forward which will allow professional journalists to visit The Place and give our young reviewers advice about developing their writing and progressing in the industry. Another set of reviewers will be recruited in May, so keep an eye out for details! theplacebedford.org.uk