Wolf Alice added to Mercury winners who have played Esquires 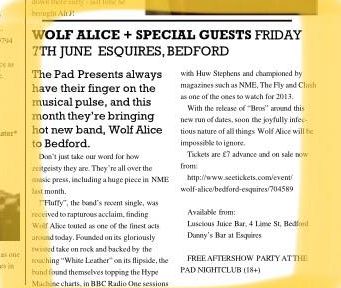 By winning this year’s coveted Mercury Music Prize, Wolf Alice have joined another exclusive club; bands that have both won the award and played at Bedford Esquires.

Over the years, Elbow, Klaxons, Franz Ferdinand, Alt J & Roni Size have all played at Esquires on their way up the ladder of fame. The Pad Presents’ Kev Bailey said, “Bedford’s on the circuit, and as promoters we’ve got a track record with bands and agents so that helps us.  It’s a constant battle though and because we’re a smaller town, there are some bands that we just can’t get.  Artists no longer have a budget from their record company, so a lot of small tours have morphed into one day festivals as they can guarantee an audience. Festival season used to finish at the end of the Summer. Now it just carries on.”

It is testament to the hard work put in by Kev and Gareth Barber of The Pad Presents / Esquires that they have brought so many emerging artists – on the cusp of greatness – to the town.  They also support the town’s emerging talent too. From Don Broco, Pearl Handled Revolver and the Quireboys to the new kids on the block, Tom Grennan, the Scruff and Elijah Miller, all have cut their teeth on the Main Stage at Esquires.

Thanks to the quality of events at Esquires, Bedford benefits from ‘gig tourism’. “We attract many people from outside of Bedford and lots of them spend the weekend here,” said Kev.  These visitors not only book somewhere to stay, but they’ll also visit the pub, have a meal, check out the rest of the town and – hopefully – come back.  Gig tourism contributes greatly to the town’s visitor economy and the part Esquires and other music venues play in that should not be underestimated.

So, this weekend, are you going to take a chance on Indoor Pets? With the Pad Presents’ track record, it could be them on the Mercury Prize winners’ podim in 2023 and you can say you saw them at Bedford Esquires first…