Vote! is a new play entirely devised and performed by Certain Age. Using material from a wide variety of sources, the piece explores how women gained the vote and takes a, sometimes light-hearted look, at how attitudes have changed (or not!) over the last century.

A terrifying encounter with an escaped convict forever changes the life of the orphaned Pip. Turning his back on his humble beginnings as a blacksmith’s apprentice, he strives to better himself and become a gentleman, unaware of the hidden dangers that await him.

This exciting and fast-paced adaptation lays bare a tissue of lies and guilt, in Charles Dickens’ least sentimental love story. It also tackles big questions of identity, while mustering a cast of unforgettable characters, chief amongst them Miss Havisham, Magwitch, Estella and Joe Gargery.

Stewartby Operatic Society presents
Gilbert and Sullivan’s Ruddigore
Venue: Stewartby Village Hall MK43 9LX.
Tuesday 20 to Saturday 24 November at 7.30pm
Tickets:  £10 – £12
This comic opera is set in a Cornwall village, where a team of professional bridesmaids is looking for work. Rose Maybud and Robin Oakapple are a likely couple, but Robin is hiding his true identity, Sir Ruthven Murgatroyd, baronet of Ruddigore. Unfortunately, the title comes with a curse that means he has to commit a crime a day or die in torment. The audience are in for a treat with a few Gilbertian plot twists, directorial liberties and beautiful music.
Tickets available at www.saods.org.uk or on 07557 670703 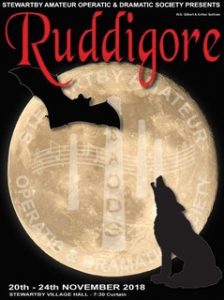 The Quarry Theatre at St Luke’s

Enjoy an intimate evening with John Challis, one of the nation’s greatest comedy actors, best known as Boycie in BBC1’s Only Fools and Horses. In this one-off show, the national treasure will reveal secrets from the set with stories and anecdotes from his dazzling career.