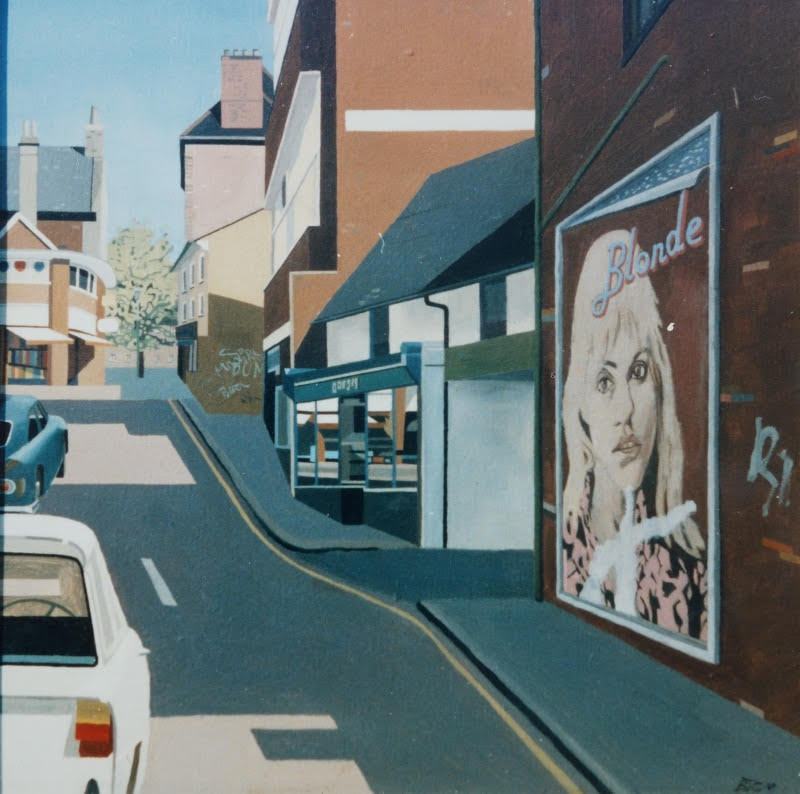 In July 1991, the artist, Bryan Charnley, took his own life while living in Bedford. Posthumously revered, his series of extraordinary self-portraits – undertaken while experimenting with the doses of his schizophrenia mediation – was featured in the Telegraph magazine and exhibited at the National Portrait Gallery in 1995.  During his lifetime, a number of his paintings were sold to people in Bedford and Bryan’s twin brother, James, is seeking to find the owners of work including ‘Lime Street’ (pictured).

To help find the painting and to highlight World Suicide Prevention Day (Monday 10 September), the Bedford Clanger spoke to Paul Feary, retired manager of Barford Avenue day centre and current ELFT governor.  We spoke about the huge strides taken in suicide prevention in Bedford and about Bryan Charnley, who was a service user at Barford Avenue before his death.

Since 1989, Paul has been at the front-line of mental health provision in Bedford Borough. ‘At that time, mental health services weren’t joined up with the NHS. We were employed by Bedfordshire County Council Social Services and the centre was run by us – social workers. The centre was for people with severe and enduring mental health conditions including schizophrenia, bi-polar disorder, psychosis, suicidal depression and personality disorders.  We took an holistic approach to our work. We had a volunteer-run allotment, we ran yoga classes, therapy groups and introduced cognitive behavioural therapy. It didn’t feel like we were at the cutting edge at the time, but looking back I realise we were.’

At that time, three or four service users a year killed themselves. ‘Of course this was tragic for the families involved and it was also absolutely devastating for those of us who worked with the patients.  We knew we could do something about this. We felt these deaths were preventable and we knew we could make a difference.’

The culture that Paul and his team instilled at Barford Avenue continues (the centre is now the Barford Avenue Resource Centre, delivering the Recovery College services) and the statistics reflect the difference they’ve made.

Artist, Bryan Charnley, suffered from acute schizophrenia and used the services at Barford Avenue. He exhibited his work numerous times in London and in 1984 four of his paintings were purchased by the Bethlem Royal Hospital for their permanent collection. Following Bryan’s suicide in 1991, his series of self-portraits (painted while experimenting with varying doses of medication) was exhibited at the National Portrait Gallery in 1995. The 17 portraits show graphically the terrible suffering of mental illness.

During Bryan’s time in Bedford he sold a number paintings to people in the town.  His twin brother, James, has invoices and records of many of the sales of Bryan’s paintings, but would dearly like to find the current owners.

Do you own one of Bryan’s paintings or know someone who does? We’d love to see the paintings – a lasting legacy of Bryan’s talent.

This event will feature the launch of the ‘See the Signs’ campaign across Bedfordshire and Luton with free drop in workshops available on seeing the possible signs of suicide risk, supporting young people and a number of informal information talks. Local services will be present throughout the afternoon to share information on how they are working across the area to prevent suicide.

This is a free open community event – everyone is welcome to come along.