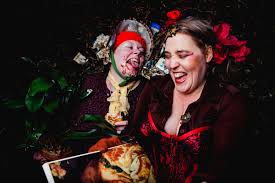 Following their successful run of The Full Bronte Literary Cabaret at the Edinburgh Fringe Festival, Scary Little Girls brought the show to The Place Theatre on Wednesday 24 October.

This show was a wonderful combination of music, comedy, and storytelling, which focussed on the Bronte family and their works with even a Kate Bush impression thrown in!

If you’re not particularly fond of audience participation, then this is definitely not the show for you. The performance started with the audience throwing confetti and cheering and then there was a Bronte trivia quiz (which we only managed three questions of before the entire audience was out). Throughout the show, Maria would pick on audience members, but always kept it fun and light-hearted, just as she did with her innuendos. Audience members were stroked, sniffed, sat on, kissed and licked, although some of the victims were rewarded with packets of crisps with the Bronte’s names on them on sticky labels.

The contrast between the hosts Maria and Brannie was always a great source of humour and their characters played off each other very well. Like any classic double act the two were characterised by their different appearances and approaches to life. Maria was very exaggerated and glamourous in her beautiful red corset while Brannie, in her jumper and woolly hat, took on the role of the stooge. Brash moments such as when Brannie exposed her rear as she played Mr Rochester getting ready for bed mortified Maria (and the unsuspecting audience!), but despite their differences they held the show together well.

The set was very simple with a ‘Music Corner’ that had a keyboard, speaker and ukulele, a ‘Props Corner’ and a large blackboard centre stage, painted to look as though it had red curtains around it to lend to the atmosphere of an Old Time Music Hall theme, and the names of some of the Bronte’s famous works written in different coloured chalk which came into play with a quick fire quiz at the end of the show. Overall the piece was a ‘wuthering delight’ and, despite the moments of sometimes unwanted participation’ had most of the audience howling with laughter.