Mark Steel was in town 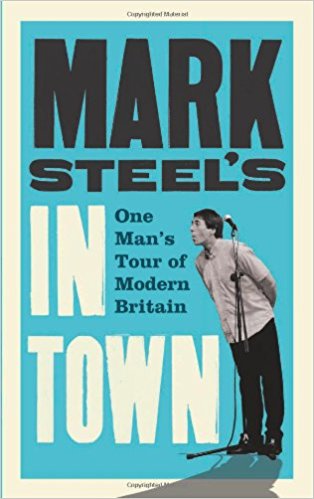 On Wednesday 10th May, Mark Steel came to town with his Radio 4 show. Performing to a packed/oversubscribed Quarry Theatre (apologies to all the BBC ticket holders unable to get in), Mark spent an hour romping through the peculiarities of Bedford. From it’s ambiguous geographical location (Is it in East Anglia? Umm, not really. Is it in the Midlands? Mmm, not really), to its sporting alumni and revelling in the bonkers Panacea Society, the whole evening was a satirical look at the ‘best’ of Bedford.

Mark turned his attention to our newest bridge, our oldest public schools and famous residents who left in their infancy including Ronnie Barker and Trevor Huddlestone. He suggested that John Bunyan only remained here due to his incarceration.  The Airlander and Cardington Sheds naturally got a mention, as did the Talking Statues.

The star-turn of the evening (apart from the Paula Radcliffe/state school heckler) was Libby from La Piazza, representing Bedford’s entire Italian community.  He received the honour of reading out the credits at the end of the show, in both languages.

Thanks Mark, for coming to Bedford. It was great to have you in our town, even if you still don’t know quite where we are.

Previous articleBedPop Repair Shop this May with Max McMurdo
Next articleBlack Tom Jumble Trail is back!