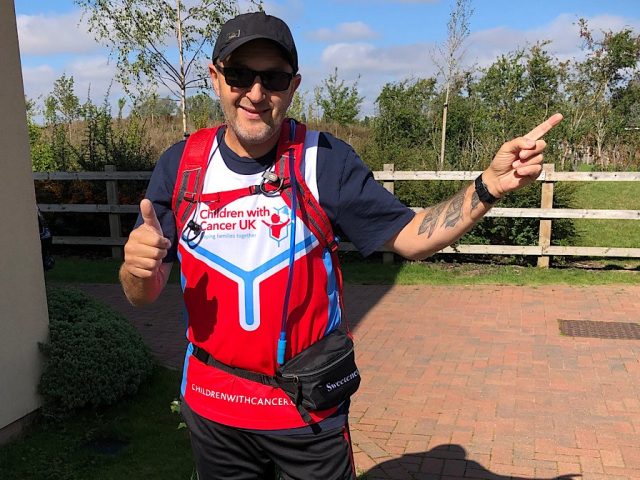 Starting on Friday 27 August, Godwin DeBattista, 57, (aka ‘Goddo’) will lead the Bedford fundraisers on the 400,000-step route, finishing at Southend beach on Monday 30 August.

They aim is to raise £3,000 for charity Children with Cancer UK.

Goddo said: “We support Children with Cancer UK, who do a lot of good work. They keep families together. They fund research and research gets higher survival rates, meaning more children can ring the end of treatment bell. So, that charity is very close to my heart because I believe in what they do.

“In the UK I discovered that 8 out of 10 young children with cancer can be successfully treated thanks to increased research. So your support is going to a really good cause.”

Realising charities were taking funding hits, due to Covid, Goddo thought: “I need to do something about this.”

He said: “It’s such a lovely experience to be involved and doing this as Team Goddo because we’ve realised that we are creating a lot of attention which, in turn, raises awareness about childhood cancer.”

He said walking “165 miles for four days is really quite a task. But this encouragement that we get makes us really full of spirit to actually complete the task on day four.”

This is not Goddo’s first charity ‘rodeo’ though.

Originally from Attard in Malta, Goddo was an active fundraiser for Maltese charities. He worked a lot with people with disabilities and children with cancer. These events were a little easier on the feet though as they focused mainly on entertainment.

His affinity with childhood cancer began when his dad was receiving cancer treatment. Seeing a 10-year-old child on the same ward struck a cord and he decided to do something to help.

It only takes a brief conversation with Goddo to realise he has a huge heart and is incredibly humble.

He sees the team as ‘we’, not ‘I’: “When we talk about Team Goddo, mainly its family, friends, work colleagues, they make up Team Goddo because they join parts of the walk as well, but also the general public.”

He credits the 240 Just Giving supporters, family, friends and work colleagues for raising last year’s £6,000 and said: “For us, they are Team Goddo too because we’re in it together, that’s what life is about. We believe that we’re always in this together. So, it’s always been about ‘we’ and not ‘I’ as Goddo.

“There’s a lot of people that I say with love, is Team Goddo.”

Even Prime Minister Boris Johnson and Team GB athletes have got on board.

The PM was invited to join Goddo on the Kensington leg and although he was unable to attend, sent his “best wishes for an enjoyable and successful walk.”

Goddo said: “He can’t physically be there, but he is there in spirit with us, so that’s very encouraging.”

Goddo said: “It’s very sweet they get involved and help us in this way.

His message is clear: “When you think that every day, more than 12 children and young people get diagnosed with cancer in the UK, that’s really a number, 12 per day. They need all our support. So, I encourage people to support and do their own events, like we’re doing because it really, really helps.”

How you can help:

You can donate through Goddo’s Just Giving page here

The Team would also be delighted for people to join them on stretches of the walk. Goddo said: “I would appreciate people to share the love and come and even join physically. It’s very rewarding.”

For more information regarding the route etc see here

He described the support he’s had as “lovely to see, especially after the 18 months that we’ve all had, to see people coming up with this kindness, it’s really overwhelming.”