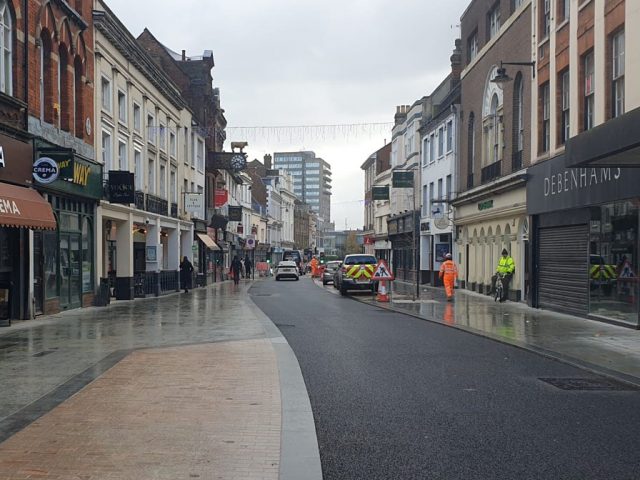 The works to improve Bedford High Street were completed this week, just in time for the end of November deadline and to welcome Christmas shoppers to the town centre.

The roadworks to create a single lane of traffic, wider pavements, better short-term parking and drop off bays started in February.

And despite requiring partial resurfacing as the scheme was nearing completion, the ‘end of November’ deadline was achieved.

Citing her own professional experience and evidence from analysis of many other towns’ street improvement schemes, Kate said: “High-quality streets that are more accessible for all support the economic regeneration that will benefit the town.

“I feel it is a more pleasant place to be, and more in keeping with what our High Street should represent – a place where we feel safe and able to move about, and that in turn benefits businesses which need all the custom they can get.” 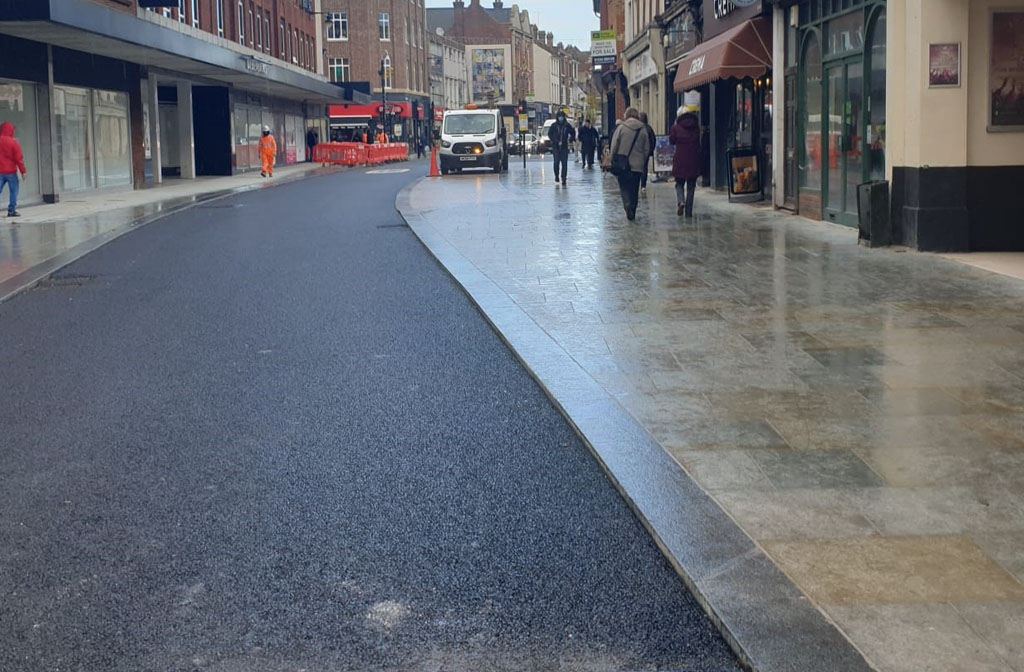 Christina Rowe, chief executive of Bedford Business Improvement District (BID) said that businesses and visitors she had spoken to were pleased with the improvements.

“We are pleased to see the works coming to a successful conclusion…this is particularly welcomed as the Christmas trading period starts to get into full swing and we encourage people to support their town centre and buy local.”

As well as improvements to the public realm, Bedford Borough Council and Bedford BID have collaborated with the landlords of the former Debenhams and Beales buildings to install vinyls in the windows. 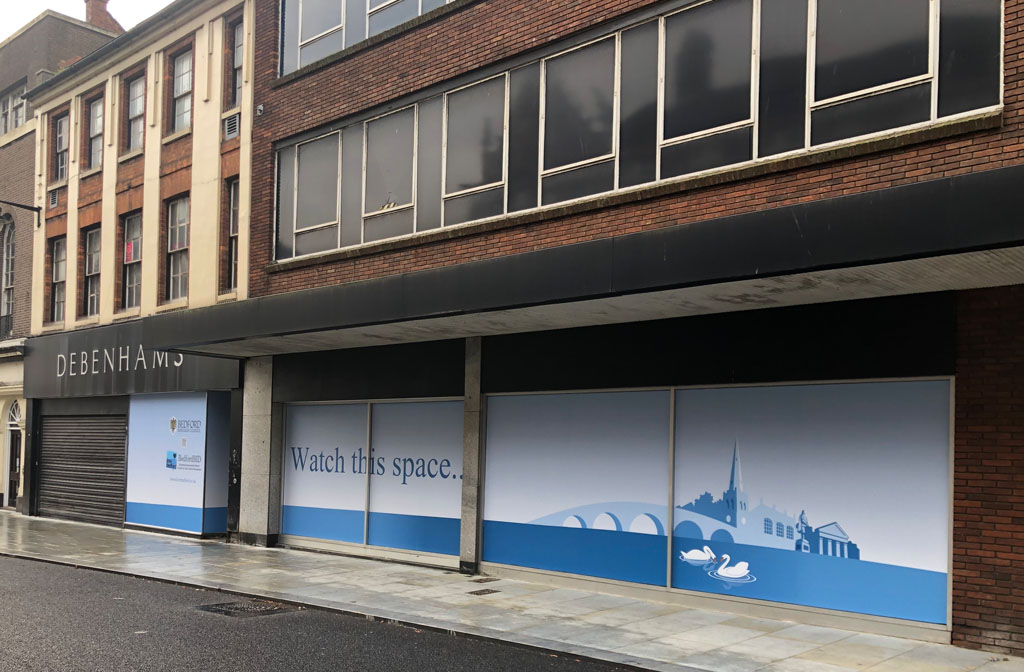 “While we can’t magic away the closure of national chains, we do have the power to invest in improving the town centre,” said Cllr Henry Vann, portfolio holder for town centres.

“We are having proactive conversations with the landlords of the two buildings which has enabled us to work with them to install the artwork.”

The reality of empty shops

Alongside Debenhams, there are currently eight empty units in Bedford High Street, five of which have been left by national chains either closing or relocating: Bathstore, Sharps and two Subway branches.

However, in a recent poll conducted among members of the We Are Bedford Facebook group, over half (53%) of the 438 that took part at the time of publication, believed there were between 10 and 15 empty shops on the High Street.

Just 21% of respondents correctly said that there were between 5 and 10 vacant units.

However, almost three-quarters of the respondents believe there are more than 10 empty shops on the High Street.

It’s clear just from this straw poll that there is a disconnect between the reality and perception of the number of empty shops in the High Street, a belief often reinforced on social media.

Disappointment at lack of cycle provision

While broadly supportive of the regeneration of the High Street, Bedford’s Green Party councillors are less happy about the lack of cycling provision.

Cllr Lucy Bywater, who represents the town centre Castle ward, said “I am particularly frustrated that this has been done without any improvement to the provision for cyclists – there was very easily enough room for a much needed south-to-north cycle lane.”

She and fellow Green Cllr Ben Foley told the Bedford Independent that they welcomed the visual improvements and in particular the inclusion of trees along the pavements.

“We very much hope that people will experience the wonderful independent shops and cafes in the town centre that make it unique,” said Cllr Bywater.

“With this largely government-funded scheme, the High Street will have a real chance to revive and showcase itself,” said Conservative deputy group leader, Cllr Roger Rigby.

“The wide pavements and reduced pollution will give established and new businesses a real opportunity to succeed and grow.

“The Government is also making the High Street a £1.83m Heritage Action Zone to restore some of the many attractive buildings including their original shop fronts and highlight its cultural place in Bedford past and present.”

“With the Mayor always complaining about lack of government funding I hope he will put up a banner across the High Street thanking them this time.”

In response, Cllr Vann stated that aside from the Town Deal pot of funding, “the budget gave us nothing.

“We got £30m central government funding a year in 2015. Now we get less than £6m. Despite that, we’ve managed to keep all our libraries open and are investing in improvements in the town centre.”