Ex-Baldessarre Gallery in Queens Park, Bedford is currently hosting the first ever art exhibition by alternative comedian Simon Munnery entitled, ‘What Am I?”

The gallery is also hosting a screening of NOHAT’s ‘What is she?’ installation at 3pm.

It will include many of his well-known characters such as Alan Parker: Urban Warrior, with whom Munnery had a cult BBC Radio 1 show, and League Against Tedium, which formed the basis of his BBC 2 television series Attention Scum.

Munnery, who lives in Bedford, was described by The Scotsman as, ‘The closest that comedy gets to modern art’, and this exhibition will allow visitors to decide for themselves if his eclectic, profound, and humorous endeavours can be considered art, or not.

Some of Munnery’s props from his 35 years of performing at the Edinburgh Festival have been transformed into sculptures, and his stick-men drawings that appear in many of his shows will be exhibited.

Munney has had brushes with the world of art before, having collaborated with Banksy on Exit Through the Gift Shop and appearing occasionally as spokesperson for the mysterious graffiti-artist.

The exhibition features Alan Parker: Urban Warrior, returning after 25 years to amuse the crowds at Extinction Rebellion. During Alan’s stirring routine, which includes showing the crowd some of his drawings, we see many of the crowd getting arrested. We also witness a funeral, staged by Munnery in his garden, in which he ‘catches the Wreath’.

Death, pretentiousness and politics are all scrutinized for jokes, but in the humour something else seeps out, and perhaps that something could be ‘art’?

What Is She? is a sister event to What Am I? and is curated by NOHAT. It’s a video art screening, showcasing work by 10 exciting female video artists including Rebecca Moss. 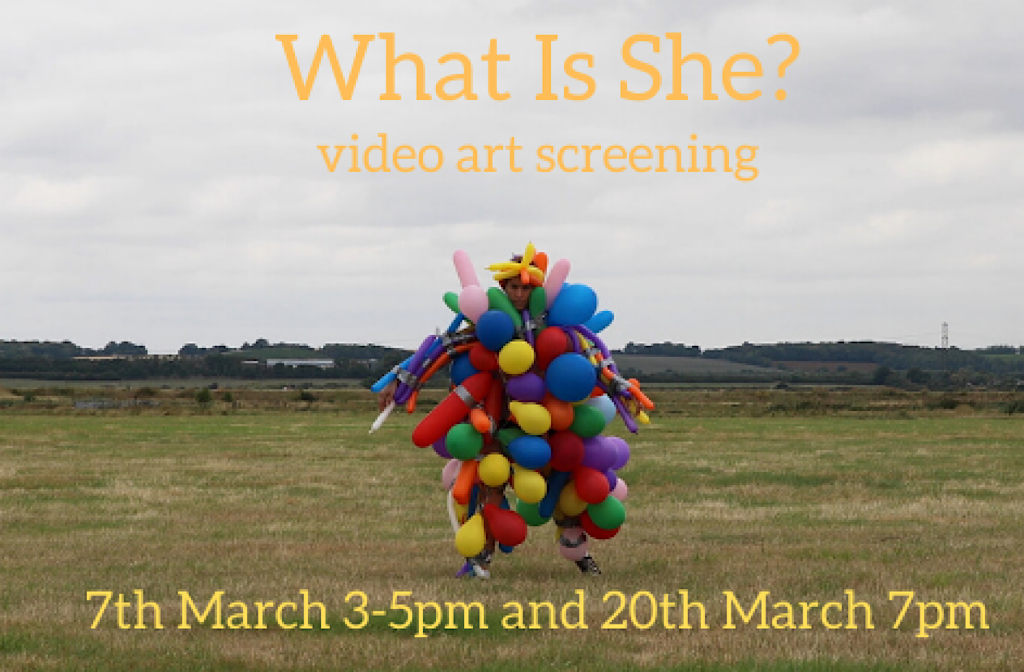 The Bedford screening takes place today (Saturday) at 3pm and is hosted by Andy Holden at Ex-Badlessarre at 103 Coventry Road in Queens Park.  Expect to be amused, tickled and perhaps a little confounded.

The events are free (donations welcome) and open to all.

Ex-Baldessarre is a gallery set up by artist Andy Holden in the Queens Park area of Bedford. It opened with an exhibition of a previously unknown local painter Hermione Burton in Sept 2018, and has since exhibited artists both local and international, bringing new and significant art to the town. The gallery is in a former upholstery workshop, from which it gets its name. Andy Holden’s artwork can be found in the permanent collection of theTate Gallery, Bristol Museum, Leeds Art Gallery, Towner Gallery, Eastbourne and the Arts Council Collection.

The exhibition opened on Saturday 29 February and is open every Saturday from noon – 6pm until 9th May.