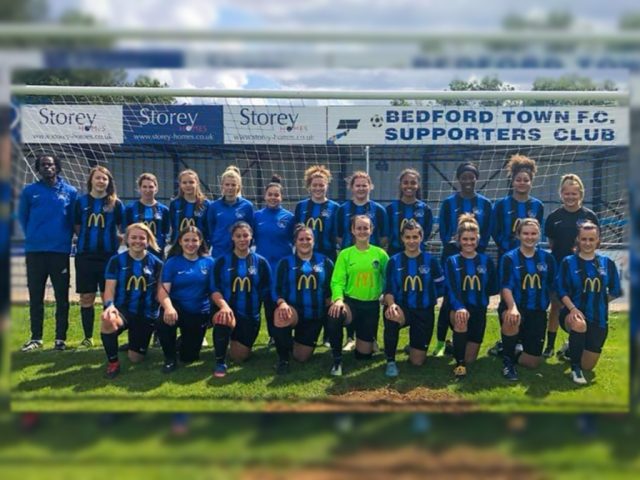 Chair of Bedford Ladies and Girls Jill Upton, told Bedford Independent about the coming season, “We have teams of girls playing from age six through to adults.

“This season we have around 150 girls playing in thirteen teams from under 8s to adults.

“The ladies first team play in the Eastern Region Premier League, which is tier five. We also have a development team playing in the County League.

“We are always looking for enthusiastic coaches if anyone is interested in getting involved with girls football.”

This season the first team are playing under new manager Simon Henry and hosted Wroxham Women FC in the first league match of the season last Sunday at the Bright Management Eyrie.

Both teams started strong from the off, but Wroxham were the first to come close when they found the net, but the goal was disallowed for being offside.

The home team reacted positively and continued with attacking play, which resulted in a penalty being awarded.

Captain Priya Bhatti stepped up and placed the ball beyond the keeper and into the bottom left of the net. (22′ BL 1 – 0 WW)

Bedford dominated the half, with the defensive back four tackling well to deny the visitors. Ashley Emerton made a critical goal line clearance, denying Wroxham their equaliser.

Just before half time, Bedford were awarded a free kick which substitute, new signing, Shianne Swarres stepped up to take. The shot was perfectly curled into the box, falling to Bhatti, who headed it just over.

In the second half the visitors came out strongly, forcing Bedford’s shot stopper Lauren Webb to make some superb saves.

Despite her best efforts, Wroxham found their way through and equalised with a shot from the edge of the box. (65′ BL 1 – 1 WW)

Bedford battled on, trying to retake the lead, and continued to create chances, including Setor Acolatse, whose shot went just wide.

It wasn’t to be Bedford’s day though as just before the full time whistle Wroxham got their second and winning goal. (85′ BL 1 – 2 WW)

Speaking after the match, team manager Simon Henry said, “This was always going to be a tough game against a team that finished second last season.

“We competed well in all areas of the pitch and played some excellent football. We have changed the way the team plays so the girls are still getting to grips with it and I’m liking what they are doing.

“We will work hard in training this week ready to go again on Sunday.”

Sunday’s match is against AFC Dunstable in the league. The fixture, which was due to be away has now been switched to Wixams 3G pitch, Green Lane, Bedford, MK42 6DA with a 2pm kick off, as the Bright Management Eyrie is not available.

Admission is Free, and local support will be very welcome.