Bedford’s Save Our M&S campaign organiser, Helen Patterson, met with Calum Telford, the company’s Head of Region & Sam Gavin from their PR agency yesterday to present them with the feedback she’s been gathering from local customers.

Since the store was threatened with closure in mid January, Helen has worked tirelessly on the Bedford Independent-backed campaign, adamant to keep fighting, despite confirmation from M&S that the store will close on 4 May.

Helen has collected nearly 550 post-it notes as part of her efforts to convince M&S to rethink their decision to close the Midland Road branch.

On each note, shoppers have written what M&S means to them, as well as suggestions to improve the store’s fortunes on the site. 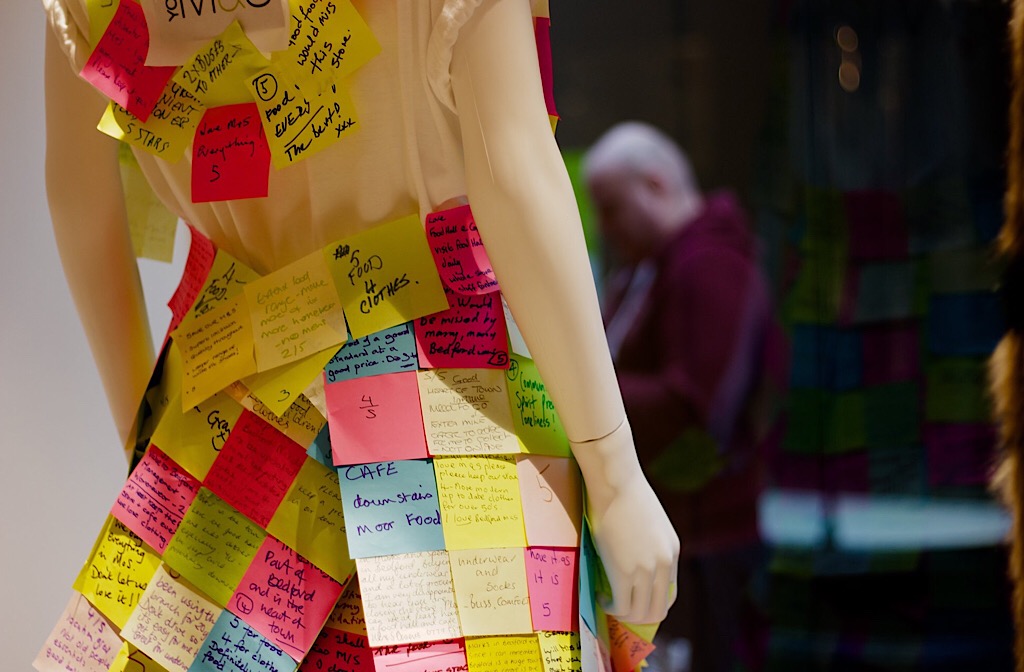 Helen also showed M&S bosses photos of the window display in Boutique Planet, featuring a mannequin in a dress made of all of the notes.

“The involvement of local independent businesses in our campaign demonstrates the impact that the store’s closure will have on the town centre as a whole,” said Helen.

Based on the most popular customer comments, Helen had commissioned local artist, Alastair Bright, to create a concept design of a new store featuring an enhanced cafe, retro awnings and larger food hall.

Following the meeting, Helen said, “The M&S representatives seemed genuinely impressed with the effort and nature of the campaign. I won’t give up until the store actually closes. There is still a chance we can save it.”

Bedford & Kempston MP, Mohammad Yasin is meeting M&S representatives at the House of Commons today to urge them to rethink their decision.

A representative of the Board of Bedford BID said: “Our volunteer board members and businesses representing 500 major names and independents spoke as one via BedfordBID to M&S.

“We are disappointed that even with the positive results of Christmas sales, as supported by our Love Bedford campaign, the decision has been made to close the town centre store.

“If closure is inevitable, he will be seeking assurances that the shop’s staff are offered meaningful employment alternatives.

“Bedford BID believes that now, more than ever, the council, big brands and independents need to keep working together.”

Helen’s campaign, backed by the Bedford Independent, has gathered huge momentum since it launched, tapping into the great affection Bedfordians have for the store.

In just a matter of days, the Facebook page had over 1,200 likes and the Bedford Independent articles were shared hundreds of times, inspiring concerned customers to write to CEO Archie Norman and to phone his office.

“Calum Telford, regional head at M&S was particularly interested in comments that related to the Plan A/2025 as there is concern in the community that the store closure conflicts with M&S’s ‘three pillar’ values: Community, Wellness and Planet,” said Helen.

“If the store does close, the focus of the campaign will shift to working with the new tenant of the building,” she continued: “it’s important that whoever takes over the site delivers what the town wants and needs.

The closure of M&S was confirmed by the store’s management on Wednesday 6 February. The date for closure is 4 May.

The loss of the Bedford store is part of M&S’s ongoing strategy to reduce its number of stores.

Read: Bedford’s Town Centre Marks & Spencer will close on 4 May