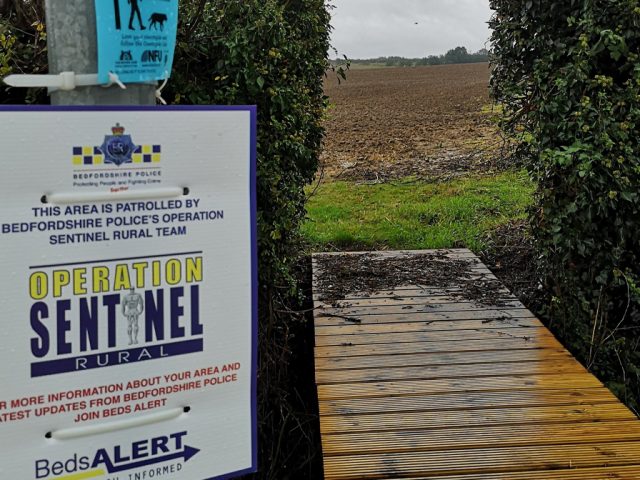 Bedfordshire Police’s Sentinel Rural team has taken part in a national week of action to target a variety of rural crimes in the area.

In partnership with the National Farmers’ Union (NFU), the Environment Agency (EA) and local councils, the force undertook their largest ever operation to tackle illegal fishing.

Operation Traverse focused on fishing without a licence, poaching and fish theft.

At the start of the week of action (7 October), 14 officers, the EA Fisheries Team and NFU officers patrolled nearly 40 fisheries.

They also displayed posters in the area with the aim to educate the fishing community, as well as raising wider awareness among the wider public.

The checked 25 large vehicles and reported six people for carrying waste without a licence. Seven people were also reported for not completing waste transfer notes.

These documents prove their waste has been disposed of in a legal disposal site and not dumped on private land, where it can damage the environment.

The team also checked scrap yards and other premises which break down cars and sell their parts.

Pulled together by Bedfordshire Police Crime Reduction Officer Lara Curtayne, with contributions from the Home Office, the EA, the NFU, the Office of the Police and Crime Commissioner and local farmers.

The handbook, which is also available online, offers advice on crimes which affect our rural communities such as fly-tipping, hare coursing and sheep worrying.

It also contains information on things such as fertiliser security and modern day slavery.

The week came to an end with rural crime and community teams patrolling the county to deter hare coursing and sheep worrying.

They also visited a number of businesses to deliver the newly launched handbook and speak to residents about their concerns.

Sergeant Stuart Grant, from the Sentinel Rural team, said: “This busy week was an amazing success.

“My team has worked tirelessly ahead of and during this week of action and I am immensely proud of the work they have delivered.

“This wouldn’t be possible without the support from our partners in the local council, the Home Office, the National Farmers’ Union and the Environment Agency…

“I would also like to thank our rural businesses and farmers; your support is always appreciated and we wouldn’t be able to carry out our work without your help.”

“Many of them have had to take quite dramatic steps to limit their vulnerability, such as blocking off field entrances and digging ditches.

“It’s good to see Bedfordshire Police recognising the impact it has through the launch of this handbook and targeted action to tackle hare coursing, fly-tipping and other rural crimes.

“Working together we can make a real difference in the fight against the rural criminals who blight so many lives.”