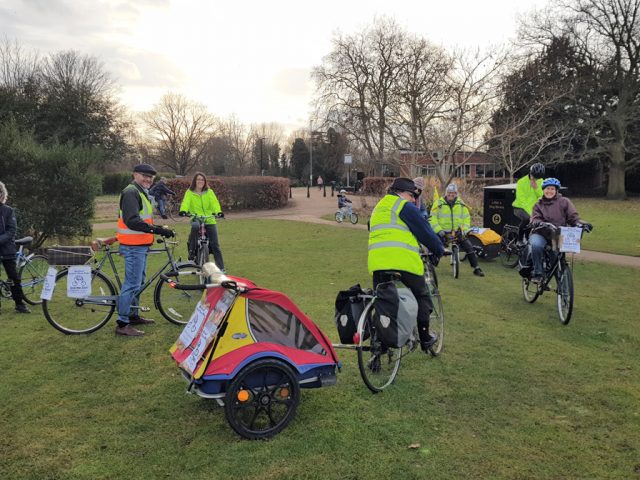 A group of cyclists rode the streets of Bedford on Saturday (5 February) to urge the council to end the current ban on responsible cycling in the town centre.

Bedford’s ‘Critical Mass’ riders have been taking to the streets on the first Saturday of every month (Covid-restrictions permitting) as part of the international Critical Mass movement highlighting cyclists’ safety.

On Saturday they specifically raised the issue of the council’s Public Space Protection Order (PSPO) which means it is currently illegal to cycle in the pedestrianised areas of the town centre between 9am and 6pm.

They also made the case for wider improvements in the provision for cycling.

The spokesperson for the group, Kate, said: “On Wednesday 2 March the council’s executive will make its decision on whether to extend the ban on cycling in the streets of central Bedford that have been closed to motor vehicles.

“We wanted to highlight the ‘A’ roads that cyclists are forced onto by the ban.

“We shouldn’t be forced into cycling in a large group to feel safe. The ban puts people off doing the responsible thing and cycling into the centre of Bedford and it is discriminatory.”

Since the Council first implemented the town centre cycling PSPO in 2016, over 3,200 tickets have been issued to those cycling illegally through pedestrianised areas of Bedford town centre.

However, critics say that nuisance cyclists are not deterred by the PSPO and many innocent people are being unfairly targeted and that the ban is discriminatory towards less able residents.

One Critical Mass rider, Jan, said: “A year ago I made my first trip into Bedford town in a year. I cycled onto the area outside the library, slowing to a stop. I got off my bike at the cycle racks to lock it up. Virtually no one was around.

“An official shouted at me and pounced.

“I tried to explain my chronic pain condition and that it makes walking difficult. He ignored me and gave me a £75 ticket.

“The council claim they have equality measures that mean something different should have happened. The truth is, as it is really operated, this ban discriminates against disabled people like me. The equality provisions just don’t work and the council executive should end this ban.”