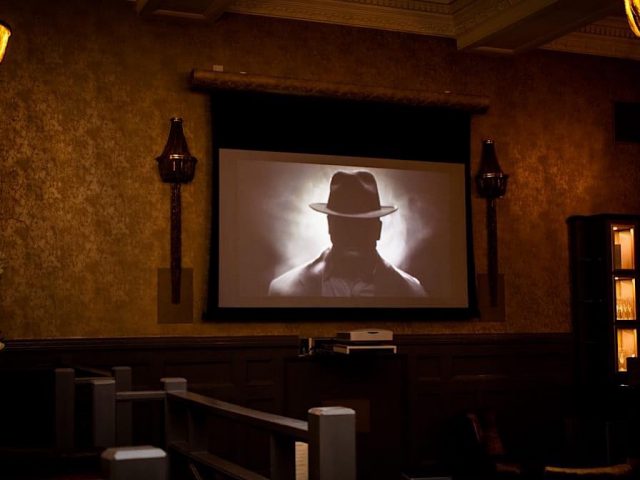 While Christmas isn’t going to be the same this year, it’s comforting to see some traditions still going strong – including being able to go to the cinema and watch Christmas classics.

However, while some of the big chain cinemas are set to open on 11 December, you may prefer a cinema experience that is much more than just sticky carpets and extortionately priced pop corn.

Thankfully, if you do, Cinema @ 3 St Peter’s has you covered and it’s a cinema experience I would wholeheartedly recommend.

If you’ve already been to the private members club at 3 St. Peter’s, you will be aware of how they’ve brought a piece of Art Décor glamour to town.

The bar itself is reminiscent of the Orient Express and the service and atmosphere is relaxed and welcoming. Being able to watch a film in such a setting is quite a treat.

This is made all the more romantic for film lovers when you consider that the much-missed Granada Cinema stood next door until 1990.

On Wednesday evenings, the private members club transforms into a Cinema open to all and with a programme of films you probably won’t see locally anywhere else.

It is a collaboration between three friends, Tom, Rajat and Bali who simply love films and want to share that passion with fellow Bedfordians.

“Films from our past, films we’ve seen recently, indie films, films you’d expect to see at film clubs and independent cinemas, and foreign films are what you can expect here,” said Tom.

And they’re delivering exactly that.

They started with a ‘just for fun’ screening of It’s a Wonderful Life for Christmas 2019, following this up with a celebration of film noir.

“Knowing you’re going to see a film you’ve maybe not seen before is an attraction, but even if you have, it’s about the experience of seeing that film in a setting like this,” adds Tom.

And while the screen and sound of the cinema is excellent, it’s the experience of the venue that adds something special, with a fully licensed bar and food all served to your table as you enjoy your film.

“You would not find this anywhere else locally,” says Rajat. “It’s a good evening out, come and have a good drink with good ambience, right in the centre of Bedford.”

As cinemas start to reopen, the fourth season at Cinema @ 3 St Peter’s, will be a series of Christmas Films to get you into the festive spirit. This starts with Scrooge (1951) on 9 December.

Following this, they’ll be screening White Christmas, and Love Actually. They’ll continue the holiday season with When Harry Met Sally just before new year’s eve on the 30 December.

In the new year they’ll start 2021 with The Third Man on 6 January, a film regularly voted as one of the best British films of all time.

Tom, Rajat and Bali have plenty of other ideas for future film seasons throughout 2021 too, “It’s not just about what we want to see,” says Tom.

“We do consider what the audience would like to see and ask for suggestions, so we get to see films we’ve not seen before too.”

Cinema @ 3 St Peter’s is truly an inclusive experience. Whether you’re a fan of Mel Brooks’ comedies, foreign language or cult classics, there is something for everyone

Go along dressed up in full glamour or something more comfortable, and enjoy the films how you like, it’s a light-hearted approach to cinema that is open to all.

You don’t have to be a member of 3 St Peter’s or Cinema @ 3 St. Peter’s to attend the cinema nights they host, but you do get a small discount on the ticket price if you are.

To find out more about Cinema @ 3 St. Peter’s and to purchase tickets, head to their website.

The reviewer was gifted two tickets to a previous screening as part of the review process.