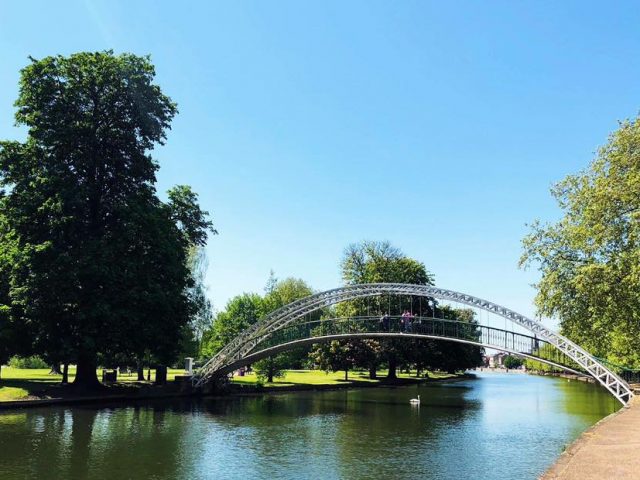 A Remembrance Day yarn bombing of Bedford’s Victorian suspension bridge, to Mark 100 years since the end of World War 1, has been given the go ahead.

The yarn bombing is being organised by local artist Verity Slaughter-Penney, who asked members of the Facebook group We Are Bedford what they thought of the idea: “I got the idea from a family member who did a similar project in her local area.” says Verity “I thought what a lovely project for the whole community, artistically I really would love to see one of Bedford’s bridges transformed with flowers, so I wondered what response Bedford would have to a similar idea on a larger scale. I was so overwhelmed by responses so I approached Mayor Dave Hodgson and am excited that we now have the opportunity as a whole community to make something spectacular happen.”

Verity is now asking creative Bedfordians to sew, knit, crochet and felt as many poppies as they can. These will then be used to decorate the Victorian suspension bridge that joins the Embankment and Mill Meadows. Red, white and purple poppies are needed to show remembrance to both humans and animals killed during conflict, as well as respectful remembrance but wishes of peace.

As many people as possible are asked to join in. No matter what your experience with yarn may be, all are welcome. Verity’s plan is to cover one side of the bridge with poppies but hopes that if enough people join in they can cover the whole bridge.

If you’d like to take part, please email Verity via vsp@artbyvsp.com or connect with her on Facebook.

Yarn bombing has become increasingly popular in recent times as a form of temporary street art. Yarn bombers sometimes work in secret to wrap trees or unsightly man made structures in colourful pieces of wool.