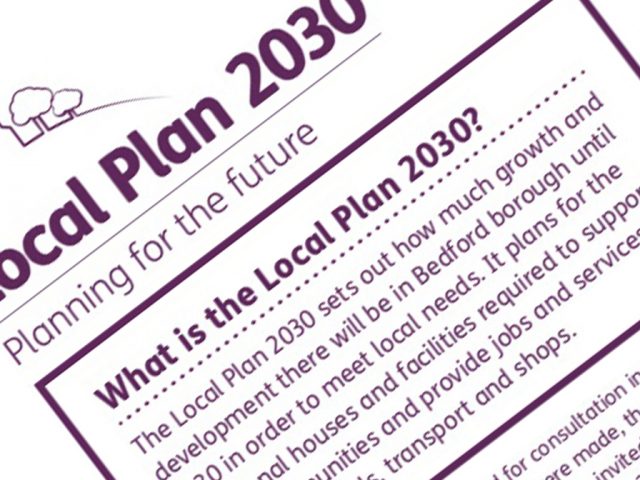 The Planning Inspectorate has sent back Bedford Borough Council’s Local Plan 2030 for further review, saying it needs to do more to take into consideration future housing growth.

This review includes a Borough-wide consultation with residents so that Bedfordians can comment on the proposed modifications.

This consultation, which started this week, runs until 1 October.

Reacting quickly to the news, Cllr Graeme Coombes, Conservative Group Leader, said: “The Mayor’s botched Local Plan 2030 has been taken to task by the Planning Inspectors for failing to plan for future housing demand.

“Despite five years of preparation, the Mayor has changed his mind and his housing plans so frequently, that even after multiple rounds of consultation, Bedford has been landed with a Local Plan that has in effect been branded as unworkable.”

But the Council has denied this is a ‘blow’ to the plans, insisting that this ‘back-and-forth’ approach with the Planning Inspectorate is standard process.

Mayor Dave Hodgson said: “Local Conservatives are either misunderstanding or entirely misrepresenting what is happening in this process.

This is simply the next step in the process of adopting the Local Plan, and indeed the Inspectors have produced a very modest list of modifications.

“In recent years the Conservatives in Central Bedfordshire had their local plan thrown out altogether and had to restart the process.

“So it is bizarre of local Conservatives to claim that these modest modifications represent Bedford Borough’s plan being branded unworkable, when that is simply not correct.”

But Cllr Coombes remains insistent that this just proves the Mayor’s Local Plan 2030 is not fit for purpose.

“The Mayor staked everything on building 4,500 homes at Colworth, but had no alternative strategy when this failed to come off, other than dumping 500 homes on greenfield sites in Bromham, Sharnbrook, Great Barford and Clapham,” said Cllr Coombes.

“The required change to the Local Plan confirms that the Mayor has previously been an Oxford – Cambridge Arc denier and is now being forced by the Inspectors to prepare for it.

“The Mayor kicked the can down the road to get him past the election in May. There is now the very real prospect he will continue to overload our villages with new homes without relief for our already congested road networks.

“The Mayor has failed to deliver a long-term, coherent Local Plan.”

How to have your say on Bedford’s Local Plan 2030

There may be a further hearing session in October for the modification (MM26) which relates to the addition of a new site at land north of Beverley Crescent, Bedford.

This is booked to take place on 22 October, 9.30am at Borough Hall.

Anyone who wishes to participate in this meeting is asked to contact the Programme Officer, Louise St John Howe by 5pm on 1 October by writing to PO Box 10965, Sudbury, Suffolk, CO10 3BF. Or by calling 07789-486419 or emailing louise@poservices.co.uk.

Could you bring Great Denham Country Park cafe to life?