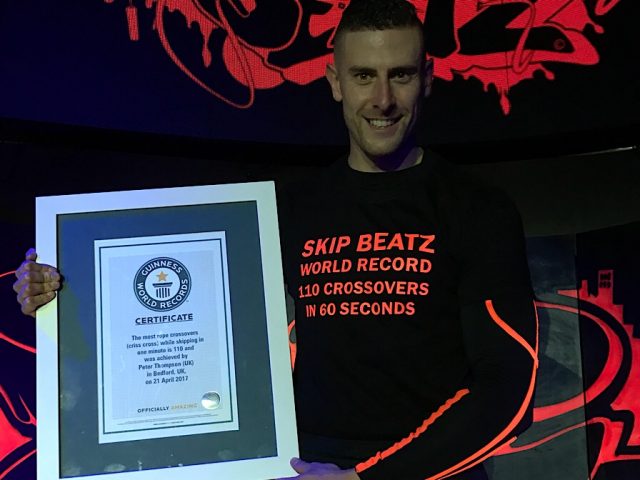 Bedford’s Pete Thompson has skipped his way into the Guinness Book of Records for the second time, achieving 117 double under crosses in a minute in March this year.

And far from just being a record-breaking hobby, Pete has credited skipping with bringing him out of depression and evolving into two successful organisations aimed at challenging negative behaviour in young people.

“At 16 years old I had no direction in my life and was arrested for cannabis possession and theft,” explains Pete.

“My father died when I was 19 and I turned to drugs to self-medicate and fell into a deep depression.

“I had a very negative mindset and couldn’t see any point to my life. Following the death of my father, I didn’t think I could get any lower, and that was the turning point.”

Turning to exercise, Pete stopped taking drugs and focused on changing his life. He completed a degree in Sport and Culture and began working as a teacher.

“I became so disillusioned with how sport and wellbeing was being addressed in schools that my depression returned,” he said.

“I left teaching and turned back to exercise – specifically skipping – to combat my mental health issues.

“Skipping became my medication and my meditation and led to the development in 2013 of Skipbeatz, a workshop that teaches children to skip to music.”

Pete originally broke the skipping world record in 2017, achieving 110 double under crosses in a minute.

“Skipbeatz led me back into schools and gave me a unique opportunity to use my personal experience, skills and knowledge to challenge the way the education system reacts to problematic kids.

“For years, schools have treated the problem children in a very negative way. I developed the Exercise Behaviour programme to proactively engage children and teach them that negative behaviour leads to consequences.

“The children construct a diagram, demonstrating the restrictions they’ll face if they continue down a particular path. We replicate a huge ‘human diagram’ on the playground so they can visualise the concept. Positive behaviour leads to success.”

Pete visits primary schools to deliver the Exercise Behaviour programme and works with teachers to embed its philosophy into schools’ culture as early as Years 1 and 2.

“It’s important that schools deal proactively with challenging students,” said Pete. “We need to build behaviour from the bottom up and we’ve begun training teachers to deliver our programme.”

Alongside the success and growth of Exercise Behaviour, skipping has very much been at the heart of everything Pete has done.

He’s also attempting the most continuous crossovers, most crossovers in 30 seconds and to break his double under crosses record, all to raise money for the mental health charity, MIND.

“In the last few years I’ve delivered Exercise Behaviour in over 60 schools and it’s continuing to grow,” said Pete.

“The main reason I have undertaken the world record is to inspire the children I work with.

“I’ve overcome anxiety and depression to achieve my goal on a world record stage and I want to encourage young people that with determination and positive behaviour, anything is possible.”

Body found in search for missing man from Stewartby

A summer of family-friendly fun ahead at the Harpur Centre