A social media post by Bedfordshire’s police and crime commissioner (PCC) has received an angry response from parents.

Following a school visit the PCC, Festus Akinbusoye, posted on Facebook about the school’s zero-tolerance on unauthorised absence from school.

He wrote that he had a meeting with a boy who was absent (until the attendance officer intervened), the headteacher, and a school governor, which went “extremely well”.

It was reported that the boy promised the PCC full attendance in the future.

The PCC wrote that he spoke about the importance of being in school, which the child got, even though he thought the PCC “was going to arrest him”.

In his post, the PCC wrote: “The evidence is there, when children are not in a school environment for long enough, bad things happen to them or because of them.

“Parents/guardians, school leadership and local authorities/government play a key role in improving this.” 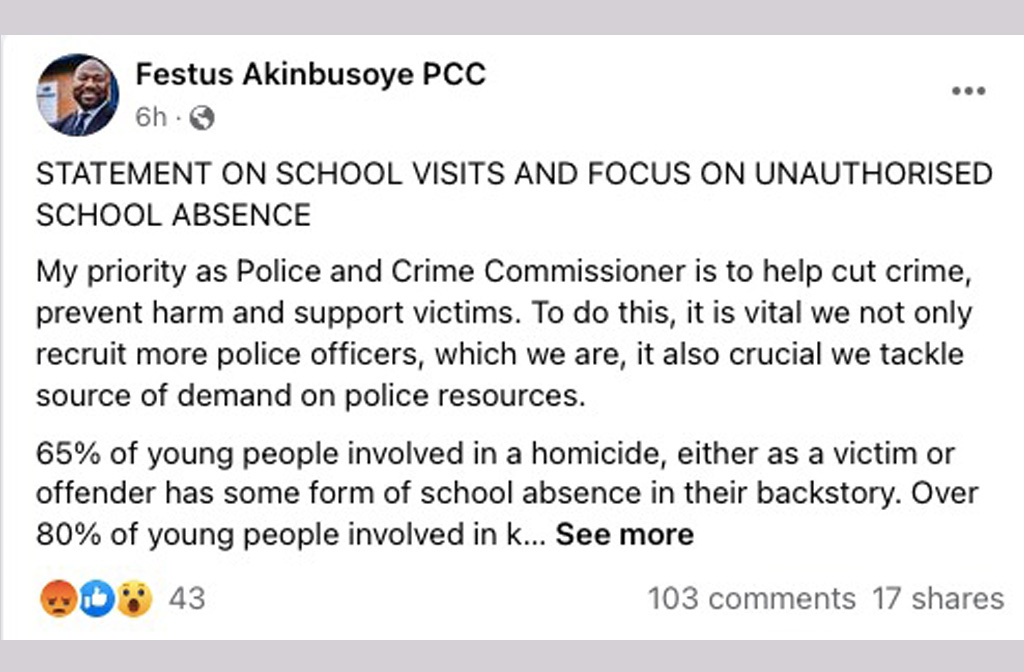 One parent posted on a campaign page: “Did [the PCC] even think to query whether this child is on the SEND register or might have needs that prevent them from going to school, such as mental health and anxiety?

“Did [the PCC] question whether they might not be at school because the school isn’t meeting their needs?

“Or did he just assume bad parents and/or a naughty child?”

Another posted that the PCC is “completely clueless” and he should take the time to find out what causes the absences in the first place.

Following the backlash, the PCC added a second Facebook post. He wrote that his priority is to help cut crime, prevent harm and support victims.

He added that his focus on supporting schools to address their efforts at improving the attendance of pupils who are persistently absent is a “win-win” for community safety, the child and policing.

Simply waiting to do something until young people come into contact with the police and the criminal justice system is not the way forward, he wrote.

He added tackling persistent and unauthorised school absenteeism is one of the ways of safeguarding children, preventing harm and better directing scarce police resources.

He said he fully understands the concerns in some posts following his recent account of the “excellent work” being done by schools to improve school attendance.

For clarity, he wrote, the child he engaged with was not a SEND pupil.

The PCC wrote that the first step towards addressing absenteeism is to understand why the child is missing school.

Then what can be done to support them back into education and away from harm or into criminality.

It is clearly a “complex area” that requires partnership work between several agencies, he wrote.

He added the “wraparound” assistance needed for young people who are persistently absent from a school setting without permission will be provided by trained youth intervention team from the Violence and Exploitation Reduction Unit, and not by the police.