In the fourth of a series of articles on the Oxford-Cambridge Arc (OxCam Arc), the Bedford Independent looks at East-West Rail.

It’s the largest transport project in the OxCam Arc, restoring train services between Oxford and Cambridge cut in 1967.

If the current schedule is met, the line will be in service by 2030: 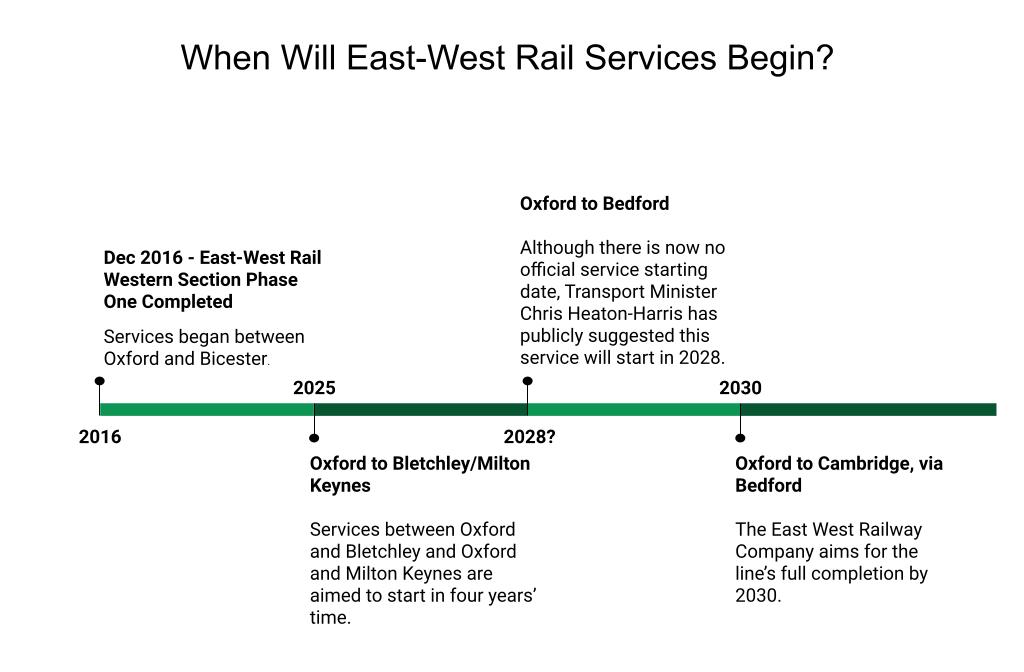 An East West Railway (EWR) Company spokesperson said their ‘ambition is to get trains up and running from Oxford to Bedford as quickly as possible’ and a two trains per hour service is planned.

Hilary Chipping, SEMLEP’s chief executive, referred to East-West Rail as part of her comprehensive statement to the Bedford Independent on the OxCam Arc’s significance for the area:

“When the final stage of the East West Rail project is in place then Bedford will have a fast rail connection to Cambridge and London St Pancras, which can open up further opportunities for new ways of living and working in a thriving and diverse community.”

Central government announced in January funding for the line between Oxford and Bletchley/Milton Keynes.

This stage’s delivery will create over 1,500 jobs and an estimated £1.1bn local economic boost.

The most recent estimated cost of East-West Rail was £5bn, based on 2019 prices.

The EWR Company spokesperson said the Bedford-Cambridge section’s cost depended on which route alignment is chosen in the upcoming public consultation.

This will take place ‘in early 2021’ and will have ‘a number of options for the public to comment on’.

The route alignment options will be based on preferred Route Corridor E, which goes from Bedford Midland through north Bedfordshire. 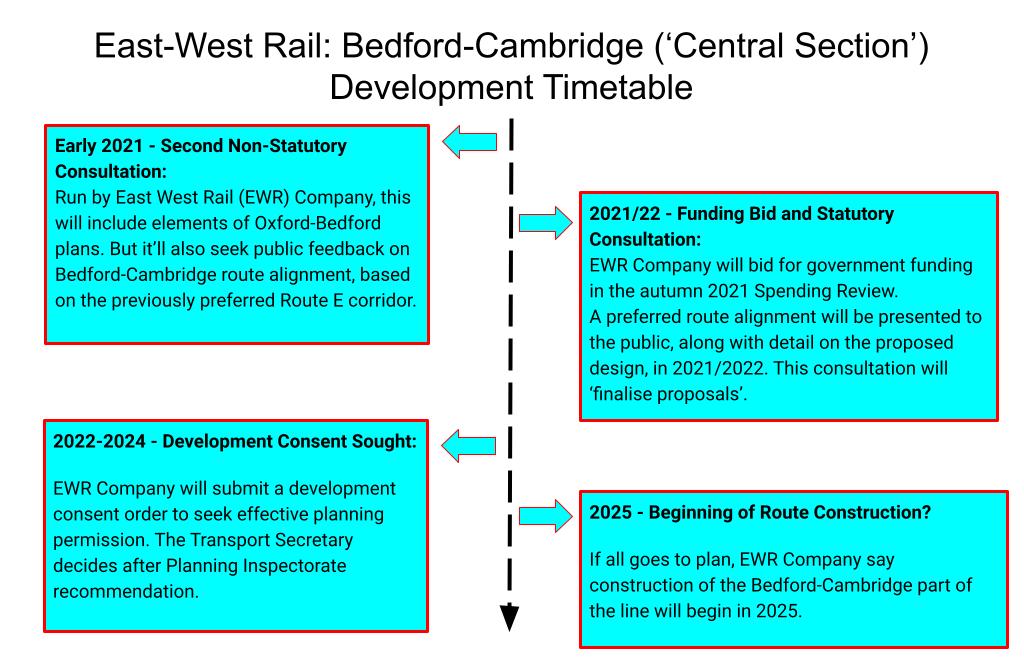 The EWR Company spokesperson added: “Building EWR will require a huge range of expertise and skills leading to the creation of 1000’s of new jobs.

“These will vary from highly specialised environmental experts, engineers and project managers, to vital construction and maintenance workers.

“Supporting industries such as catering and equipment supply will also benefit from this investment.”

Richard Murdock, planning director for local development firm Woods Hardwick, was positive about the possible benefits, including economic, of Bedford being one of the OxCam Arc’s ‘transport hubs’.

This is potentially reflected in the government’s spatial framework policy paper, published last month, which committed to ‘examine the case for development corporations’ linked to East-West Rail transport hubs.

Describing it as ‘exciting times ahead’ for the Arc generally, Murdock added he anticipated possible new Arc funding announcements in the Chancellor’s budget.

East-West Rail has also been identified for its freight-carrying potential, a controversial local topic.

The Rail Freight Group (RFG), the representative body for rail freight in the UK, produced a 2017 position paper on East-West Rail’s freight possibilities.

Freight via the line and Bedford Midland station was identified in relation to Port Talbot to Corby steel coil traffic and Felixstowe to Bristol/Wentloog intermodal services.

“We still consider that there is a strong case for rail freight on the route, both as part of the strategic rail network but also and importantly to support the construction of the new homes and infrastructure promised across the Oxford – Cambridge route.

“This will keep HGVs off the road network and significantly reduce carbon emissions too, with rail freight making 76% less CO2 than road freight.”

Describing it as ‘a key opportunity for freight and sustainable development’, Simpson added she understood that there had been no decision yet taken ‘as to whether the line will be built in a way that freight can use it.’

Freight was raised with Martin Tugwell, England Economic’s Heartland planning director. His response can be seen in the article linked below.

Read: Oxford-Cambridge Arc: What does a new regional transport plan mean for Bedford?

EWR Company are responsible for the Bedford-Cambridge section’s construction.

The EWR Company spokesperson said that ‘environmental considerations are baked into every aspect of East West Rail’.

They noted, for instance, that public opinion on environmental factors was sought in the 2019 route corridor consultation.

East-West Rail is committed though to being a net-zero carbon railway only by 2050 and will run initially on diesel trains.

The EWR Company spokesperson confirmed diesel trains were to be leased for the Oxford-Bedford section, but they’re ‘committed long term to using trains which run on green energy’.

Electrification is also ‘being actively considered as the power-source for our fleet’ once the whole line is up and running.

An RSPB spokesperson described the failure to electrify the line as it’s being built as ‘short-sighted’: “Far from saving money, in the long run this decision will cost much more, both financially and in greenhouse gas emissions and progress towards net-zero”.

EEH’s Tugwell and Bev Hindle, executive director for the Arc Leadership Group (ALG), were asked about their organisation’s stances.

Both supported East-West Rail electrification, but Hindle said: “The language probably is starting to move away from even electrified because the reality is there may be other technologies that would drive this that don’t require electricity at all, actually.

“So, for example, could we, in the very near future have hydrogen-generated trains or fusion-generated trains? So, it may not be an electricity thing at all, but the point is we need carbon zero, or better.”

When pressed on this idea, Tugwell felt that ‘it does seem to make sense that we should be electrifying the East-West main line’. He noted its proven reliability and better fit with Midland Main Line and East Coast Main Lines’ electrification.

Both felt that the 2050 net zero target should be improved upon in reality. Tugwell pointed to EEH’s new ambition, arising from public feedback, to achieve decarbonisation of all transport in the heartland by 2040.

Hindle said the Arc’s innovation abilities should mean ‘we can far exceed the 2050 target’. He suggested the diesel trains’ leasing was potentially a ‘strong indicator’ for their limited ‘shelf life’.

The EWR Company spokesperson also stated East-West Rail aims ‘to ensure biodiversity is left in a better state than we found it’.

The RSPB spokesperson said the “net gain” biodiversity pledge was a ‘cause for cautious optimism’ that HS2 mistakes ‘will not be repeated’. It was important though that this wasn’t ‘seen as a licence to damage existing nature-rich habitats’.

They added they were ‘pleased’ the preferred route corridor wasn’t one of the options which threatened running by The Lodge, the RSPB’s HQ and reserve at Sandy.
Corridor Controversy
There are people with strong concerns about the preferred Route E’s suitability.

A council petition opposed to the route has over 1,800 signatures. Brickhill Parish Council’s emergency meeting on East-West Rail last Thursday ran for over three hours.

CPRE Bedfordshire say Route E ‘will cause serious environmental pollution to town residents’ and cause ‘the destruction’ of north Bedfordshire countryside and the River Great Ouse valley area. They favour the proposed Route B corridor instead.

As covered before, Conservative MP for North-East Bedfordshire Richard Fuller said he understood that the preferred Route E was swung by Bedford Borough Council’s submission.

In particular, he highlighted the council’s comments in relation to possible additional housing in north Bedfordshire, parts 2.10-2.14. These can be found here on page 71.

The Woodland Trust didn’t favour any of the proposed Bedford-Cambridge route corridors.

Stressing they weren’t opposed to rail projects in principle, a Trust spokesperson explained it was because ‘all routes have the potential to result in the loss of irreplaceable ancient woodland, which is totally unacceptable’.

“We know that eight areas of ancient woodland, three wood pasture sites, and the Woodland Trust-owned Toft Wood all fall within the selected corridor.”

The Trust would be ‘monitoring future plans closely’, noting that national planning policy only permits the felling of ancient wood and ancient or veteran trees ‘for wholly exceptional reasons’.

The final article in this series will look into other aspects of the Arc’s potential environmental impact on Bedford Borough.

Glossary of Organisations/Terms with Major Relevance to The Arc and East-West Rail:

East-West Rail Alliance: procured by Network Rail to construct the section of East West Rail between Bicester and Bletchley, it’s made up of Network Rail, Atkins, Laing O’Rourke and Volker Rail.

East West Rail Consortium: Set up in 1995, a group of local authorities and local enterprise partnerships who have campaigned for the restoration of the rail link between Oxford and Cambridge. They’re also partly funding current Bicester to Bletchley works.

East West Rail (EWR) Company: Founded by government in 2017, to ‘drive forward’ development of the Oxford-Bedford section of the line and take control of Bedford-Cambridge’s construction.

England’s Economic Heartland: a sub-national body responsible for connectivity plans, including transport, across Central England, including the Arc area. Bedford Mayor Dave Hodgson is the chair of its strategic transport forum.

Route corridor: An area, up to 15km wide, through which a railway could run. Following a non-statutory consultation in 2019, Route E corridor became the preferred route for the Bedford-Cambridge section of East-West Rail.

Route alignment: Narrowing down a route corridor to an exact route.