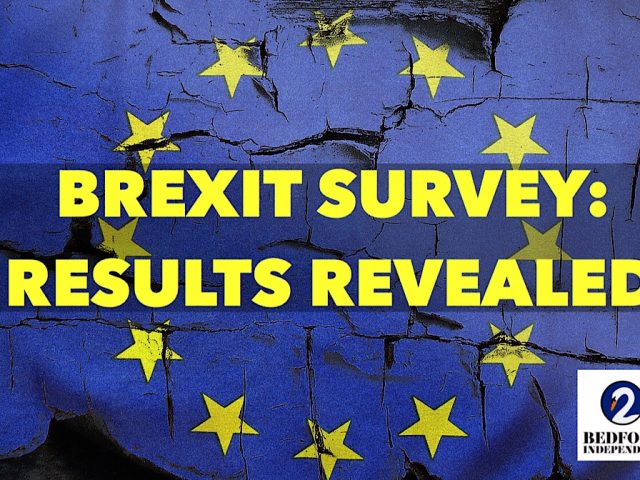 In January the Bedford Independent and Woodfines Solicitors asked 1,000 Bedfordians if, knowing what they know now, their opinion on Brexit had changed since the vote in 2016.

As the deadline for a deal looms, feelings are running high on both sides of the fence, traditional and social media is awash with opinions.

We wanted to determine where the truth lay. In partnership with Woodfines Solicitors we have analysed the results and here are the findings.

On 23 June, 2016, Bedford voters mirrored the national picture when residents elected 52:48 in favour of the UK leaving the European Union.

To ensure a significant sample size, the survey was completed by 1,000 people. We attempted to get a cross-section of Brexiteers and Remainers, although a higher proportion of remain voters took part.

Of all the respondents, just over 10% stated that, knowing what they know now, they would vote differently if asked the same referendum question again…

To determine how this might have affected the result, we segmented the data into ‘Leave’ and ‘Remain’ voters.

However, over 15% of those who voted Leave stated that, if asked the same question again, they would vote differently.

“Bedford is a bellwether location,” says election analyst and award-winning Bedford-based blogger, Mike Smithson of politicalbetting.com. “It is a good indicator of the national picture and I’m not at all surprised by these findings.

“The reality of what leaving the EU actually means is suddenly hitting home. It’s apparent that the cornerstones of our economy: cars, pharmaceuticals and finance will all be affected.

“Brexit will shape our politics for decades.”

When asked if leaving the EU would have a negative impact on local businesses, almost 20% of leave voters conceded that it would.

Leaving the European Union will not only have an impact within our shores, but also when UK residents travel abroad. We asked our respondents if they were concerned that leaving the EU would require additional requirements for driving in the EU…

Mike Hayward, Partner in the Woodfines Solicitors’ Road Transport team said: “As transport and motoring advisors, we are constantly assessing the impact of Brexit on those driving abroad as part of their occupation or for pleasure. The concerns of drivers are understandable and we advise drivers to ensure they are monitoring the requirements for their particular journey.

“The DFT have issued a recent update on the requirements for driving abroad, and we advise drivers to use this to check they have any necessary permits and licences. As usual, drivers should also ensure they have the correct insurance in place and any other legal requirements bespoke to the country they will be driving in.”

As uncertainty over the Brexit deal continues, there is one thing we can be sure of. This debate will run and run…