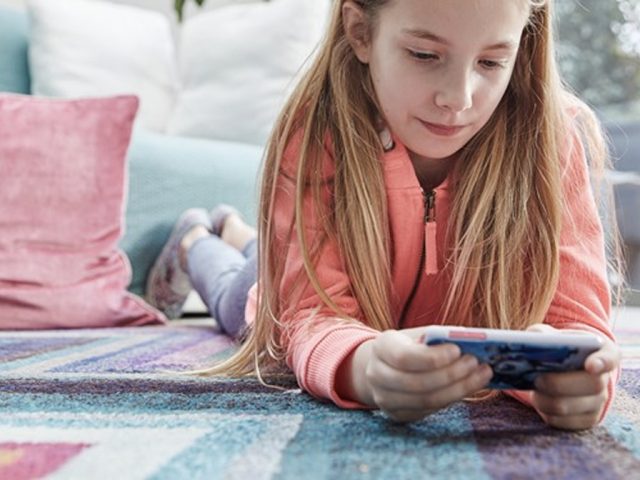 New data collected by the NSPCC has revealed that recorded online child sex offences have more than doubled in the last twelve months.

However, the NSPCC say actual cybercrimes against children are likely to be significantly higher.

They say this is due to “potential under-recording by police forces of the role of the internet and variation in the way forces log these crimes”.

The data obtained through a Freedom of Information request, does not include the lockdown period, but the NSPCC say Childline counselling sessions on grooming went up.

I felt so helpless

Olivia’s* daughter Emma* was groomed and sexually exploited through an online game called Movie Star Planet from when she was six-years-old.

The abuser gained her trust then threatened her into sending him and other adults sexually explicit images and committing sexual acts for two years.

“He would threaten to expose her if she didn’t do as she was told, that he would even put her in a “shallow grave” or kill us, her parents.

“As she got older, she is now 14, she began to struggle. Her behaviour changed, she became angry, depressed and would cry without really knowing why.

“She found it incredibly hard to make herself go into school and would ring me in tears, not knowing why she couldn’t go through the door.

“It was horrible, I felt so helpless when she talked about self-harming and not wanting to go on living.”

*names have been changed.

The news comes as Bedfordshire Police ask teachers to look out for signs of child abuse and neglect as children return to school.

The force’s Public Protection Unit says they’ve seen a rise in reports of offences against children, including sexual and physical abuse, and neglect.

“We are urging those working with children to understand if something doesn’t feel right, report it,” said Detective Chief Inspector Marie Gresswell, “even if you’re not sure, as this could potentially save a child’s life.”

A return to the classroom for Bedford children next week, may provide the first chance in an unprecedented length of time away from school for them to confide in someone about what has been happening at home.

“Teachers are able to spend a lot of time with a child, often more so than the parents,” adds DCI Gresswell.

“[They] are ideally placed to spot when something isn’t right; whether that’s in a child’s behaviour, an injury or other problem, or even to hear of difficulties at home.

“Many of these signs can be true of multiple problems that children and young people face, and all could be the result of many different forms of abuse or neglect at home.

“However, it’s important to treat every child as an individual, and take that into account when considering the possibility of abuse, but never overlook that something might be wrong.”

Bedfordshire Police’s Public Protection Unit say that it is quite normal for children to occasionally get hurt in the course of play and exercise.

But they highlight that signs of physical abuse are usually quite distinct from everyday injuries and often go hand in hand with other behaviours.

Child sexual abuse can also result in a range of problems that can become very severe.

This can include age-inappropriate behaviour and medical problems, through to depression and even self-harm.

Adults concerned about a child online can contact the NSPCC Helpline confidentially for advice and support on 0808 800 5000 or email help@nspcc.org.uk

If teachers are worried or have any concerns about a child in their care, they can raise it through their school’s safeguarding procedure, or report it through Bedfordshire Police’s website.

The NSPCC is now calling on the Government to push forward with the Online Harms Bill, which would place a legal Duty of Care on tech firms to protect children.

Any legislation put in place to secure the safety of children, would be enforced by an independent regulator

The charity says they’d like to see final plans for the bill published before the end of the year, and get an Online Harms Bill on the statute book by the end of 2021.

“These figures underline that online abuse was already rising before lockdown, and the risks to children appear to have spiked significantly since,’ said Andy Burrows, NSPCC Head of Child Safety Online Policy.

“It is now almost 17 months since the Government’s original proposals for social media regulation were published and children continue to face preventable harm online.”

The Prime Minister highlighted child online safety as a priority at the Hidden Harms Summit.

The Government published the Online Harms White Paper in April 2019 but are still yet to produce the final consultation response.

“Tech firms [must be] held criminally and financially accountable if they put children at risk.” he said.