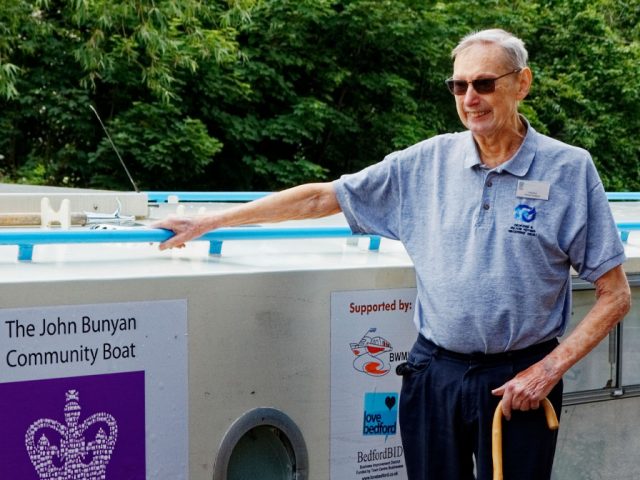 Graham Mabbutt, who sadly passed away on 22 June 2022, was a long-term and key member of the Bedford and Milton Keynes Waterway Trust and, more recently, a champion for the John Bunyan boat which has carried thousands of passengers on the River Great Ouse over the past eight years.

His death will bring a huge sadness to all who knew him.  Graham was highly respected by many and he will be greatly missed by all his friends and colleagues who have been honoured to know and work alongside him.

Graham’s involvement with the Bedford and Milton Keynes Waterway Trust stemmed from his 12 years as a Liberal Democrat Councillor in Milton Keynes where he first supported the project.

On joining the Trust in 2006 he went on to become Chair in 2011 and he worked tirelessly to support the Waterway Trust until he stood down in 2015.

However, in the meantime, Graham had become a director of the newly established Bedford and Milton Keynes Enterprises Ltd, a social enterprise set up by the Trust to operate the John Bunyan boat.

He threw himself into this role with enormous enthusiasm helping to make the new venture a huge success. He held a number of key roles with the John Bunyan team but he will forever be remembered as the driving force behind a whole range of popular trips, ranging from afternoon tea and fish and chip cruises to lively Jazz and Motown cruises – the latter largely stemming from Graham’s great love of music.

Graham’s capacity for developing new ideas to entertain passengers on the boat was legendary and the sight of the John Bunyan cruising the Ouse full of happy crowds is a real icon of Bedford and its riverside.

Luckily his personal dedication to the boat and its volunteers did not go unnoticed. In 2014 he was one of the unsung heroes of Bedfordshire presented by the high Sherriff with an award to mark their hard work and dedication to the community.

In 2019 Mayor Dave Hodgson presented Graham with the inaugural Love Bedford Visitor’s Award in recognition of the huge success of John Bunyan Boat in attracting visitors into Bedford for trips on the river.

Despite having to face serious illness Graham never gave up. He continued to work with and support the Trust and especially the John Bunyan boat. In December 2021 Graham celebrated his 80th birthday on the boat with his family.

In a final and most fitting accolade, the John Bunyan volunteers received the Queen’s Award for Voluntary Service in June 2022.

Graham was there, with the John Bunyan moored at Sovereign’s Quay in the year of the Queen’s Platinum Jubilee, to celebrate this prestigious award with the team of extremely happy volunteers.

Graham’s wife, Janet, sadly passed away in 2011 but he leaves behind him three daughters, Dawn, Karen and Jane, plus seven grandchildren and four great grandchildren.

In every way, Graham leaves behind much history and a tremendous legacy. He lived life to the full and will be very sadly missed by many.

He will be long remembered, leaving not only sadness but many happy memories for his family, friends and colleagues. He achieved a huge amount in his lifetime but above all he leaves a great legacy of happy smiles on the faces of thousands of passengers as they cruise the Ouse.