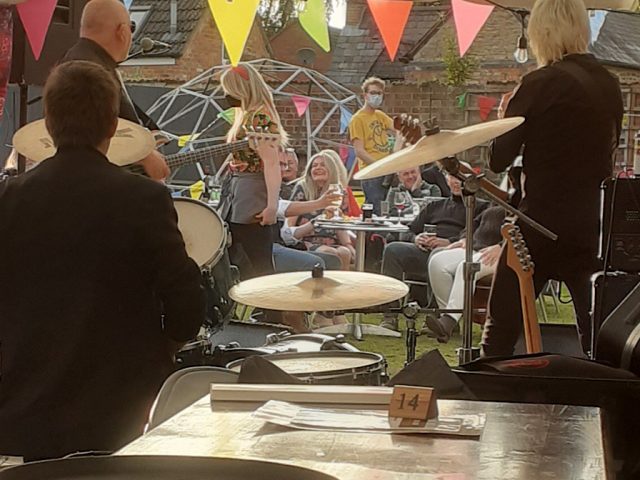 The Oakley Arms in Harrold might seem like an unlikely place for Paul McCartney to debut one of the Beatles’ biggest hits, but 53 years ago, that’s exactly where Hey Jude was heard for the very first time.

30 June marks the 53rd anniversary of Paul McCartney stopping at the Oakley Arms on his way back from a gig.

Rather than just enjoy a quiet pint, the Beatle pulled up a seat at the pub piano and delighted regulars with the first performance of Hey Jude. The incredible story can be read in full at the Harroldonline website.

To celebrate the anniversary, the pub – with the help of Transcend Music – held a socially distanced anniversary event last night (Wednesday), including a Jude, who was there on the day 53 years ago.

The Dizzy Miss Lizzys covered a host of Beatles songs, include a crack team of session musicians, including guitarist Gizz Butt – who has toured with The Prodigy and Foo Fighters, amongst others.

The DMLs whizzed through all the hits over two sets, including Help, Back in the USSR and of course a finale of Hey Jude, when the audience added a rousing naa naa naa, na na na na.

Guitarist Gizz had plenty of banter between songs and introduced the audience to Anne Geerts, a local, who had the claim of washing Paul McCartney’s underwear, although she quickly clarified that it was all of the band’s underwear.

On the pun-laden menu – Hey Fude – choices included a Let it Brie cheeseboard and a Yellow Submarine hot dog.

A great evening was had by all but for this reporter, it was the long and winding road home, back to the next village…