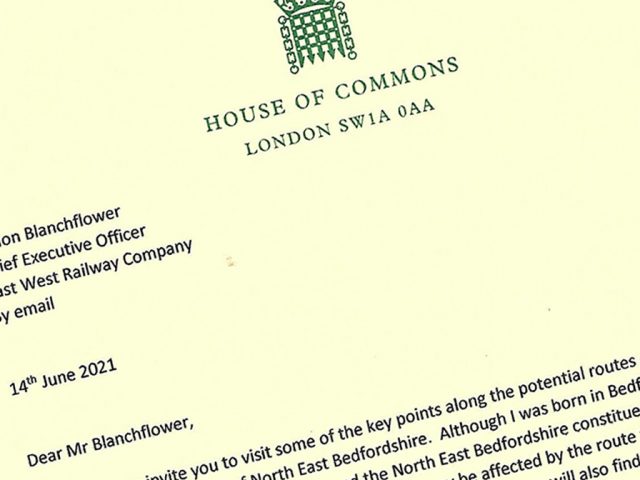 North East Bedfordshire Conservative MP, Richard Fuller, has written to the chief executive of East West Rail Co (EWR) to ask for an in-depth review of the calculations used to move the chosen Route E from most to least expensive.

He has also invited EWR CEO, Simon Blanchflower, to visit his constituency and walk the route chosen for the Oxford to Cambridge railway.

Route E was given approval in January 2020, but a year later, passionate campaigns to rethink the route have recently been mounted by residents along the areas affected.

Bedford’s Mayor and Borough Council supported the choice of Route E in order to maximise the benefits of the infrastructure investment for residents.

In 2019 there was cross-party support for this and other route options that included Bedford Midland station.

However, before and after the original 2019 consultation, Route E went from being the most expensive option to the cheapest.

Mr Fuller has now asked EWR engineers and finance managers for an in-depth review into the cost-benefit changes.

“There have been mounting concerns from residents about the aspects of the first consultation and decision processes and full transparency on the cost-benefit analysis will go a long way in resolving some of these issues,” he said.

The need for greater transparency over costs was shared by Bedford and Kempston Labour MP, Mohammad Yasin.

“I agree with Mr Fuller about East West Rail needing to be much more transparent about information to residents which is why I wrote to EWR in April to ask them to share the cost-benefit analysis on the routes so the public could make informed decisions,” he told the Bedford Independent.

“I have been clear with my constituents in my consultation response that as the 2021 consultation stands, I do not support the six-track route which requires the demolition of homes near Bedford station, and have called for a four-track electrified rail line as I think it’s important to focus on achievable outcomes for the people of Bedford.”

In the latest round of the consultation, residents in the Poets Area of Bedford also raised grave concerns that some of their homes would be demolished if EWR pursued a six-track rather than four-track option through the rebuilt Bedford Midland station.

Read: Residents left ‘reeling’ ahead of next stage of East West rail consultation

In the Council’s response to the consultation, they urged EWR to progress with a four-track solution.

Richard Fuller, who recently described himself in Parliament as ‘agnostic’ over which route was chosen, has said that Mr Blanchflower must visit North East Bedfordshire to ‘walk the route’ himself.

However, as Route E has received government approval, it seems unlikely that the meeting would – as campaigners hope – reverse the decision and give the green light to an alternative route.

“Decisions like this are not about looking at lines on a map in your office,” he said.

“Decision-makers need to see the impact on the environment and communities first-hand.

“I was born in Bedford and have been the MP for both the town of Bedford and for North East Bedfordshire, and even so I have still found it extremely useful to visit the affected parishes in my constituency to help visualise the impact of the proposed rail line.

“I think as CEO of East West Rail, Simon Blanchflower would also find it useful and I have asked him to find a date so I can join him on his visit.”

In a statement to the Bedford Independent, a spokesperson for EWRCo, said: “Mr Blanchflower and his team have spent a lot of time on-site during the development of proposals at locations across the East West Rail route, including Bedford, although this has necessarily been more limited since Covid restrictions came into force.”

They described their proactive engagement with NE Beds constituents and said that EWR representatives were keen to meet Mr Fuller in the local area.

“We’re in touch with his office to make those arrangements,” said the spokesperson.

Richard has also asked for a meeting with EWR analysts to go through an in-depth review of the calculations that informed the start of the 2019 consultation and a line-by-line explanation of the cost-benefit changes that led to a switch in the order of the routes in the final 2019 report.

“I have also asked for a meeting with the finance and engineering teams at East West Rail to undertake an in-depth review of the calculations behind the indicative construction costs for Routes A-E at the start of the 2019 consultation and the changes to each of these costs that led to a switch in the order of the routes in the final 2019 report,” said Mr Fuller.

Mr Yasin added, “Mr Fuller has said himself in parliament that he is “agnostic on what the route decision should be”, presumably because he knows that the EWR project is a once in a generation opportunity to bring much-needed investment and connectivity opportunities to our area.”