Mid Bedfordshire MP, Nadine Dorries has faced criticism following a message sent to a constituent from one of her caseworkers.

The email is in response to a question about whether it will become mandatory to have a coronavirus vaccine.

In the email, Ms Dorries’ colleague says: “The Covid Vaccine will not be made mandatory. However, if you choose not to take the vaccine, then you will face short-term restrictions to prevent you infecting anyone else until society has achieved herd immunity.”

It went on to say: “Your fundamental rights to choose whether or not you take the vaccine do not include a right to endanger others.”

From the office of Nadine Dorries
1 of 2

In a response on Twitter, Ms Dorries appeared to distance herself from the response, saying that she hadn’t signed it off and that it was the work of an inexperienced new staff member. 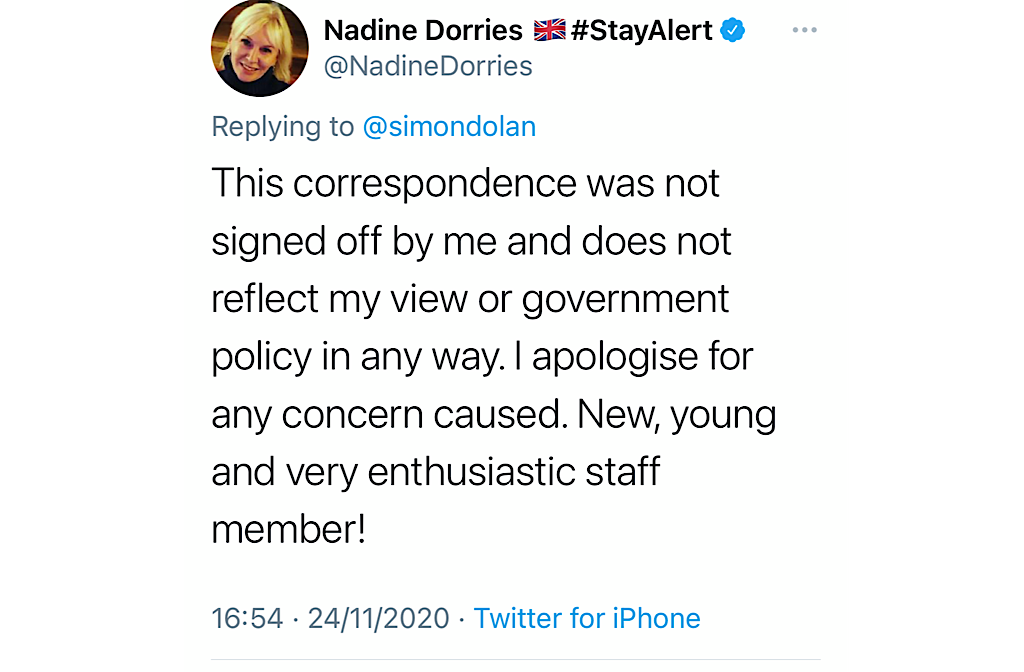 The email was from one of Ms Dorries caseworkers, Joe Irwin, who has been working for the Mid Beds MP since at least March.

Bedfordshire’s other MPs, Mohammad Yasin and Richard Fuller, told the Bedford Independent that as mandatory vaccination was not government policy, it was not something they could comment on.

It’s not the first time the Health Minister has courted controversy around COVID-19. Earlier this year she stated on Twitter: “If herd immunity existed, measles and chicken pox would have been wiped out years ago. There is no such thing as herd immunity.”

This was classified as ‘incorrect’ by the Channel 4 fact check service, which stated: ‘”Despite Ms Dorries’ claim, it is possible to achieve herd immunity to measles.

‘As the NHS website states: “If 95% of children receive the MMR vaccine, it’s possible to get rid of measles.”

‘Indeed, the UK did achieve “elimination status” for measles in 2015, but it was revoked by the World Health Organisation 2019 after an uptick in cases.

‘It’s thought the reason for this was a low uptake of the second “booster” shot, which is needed to secure long-term immunity.’

The Bedford Independent contacted Ms Dorries for a comment but she did not respond to our request.