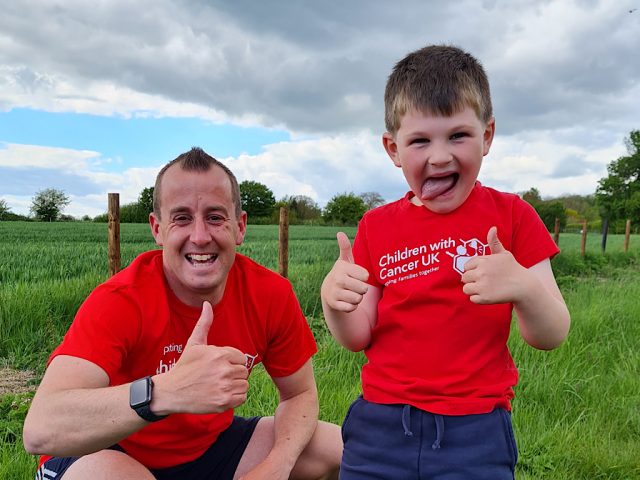 Mike Evans, a fitness mad PE teacher from Bedford has taken on the ultimate challenge of running seven marathons in seven days to raise money for Children with Cancer UK.

Mike, a teacher at Biddenham International school has never run a marathon before but is now running seven to raise funds though locally based charity Finnley’s Warriors.

He ran the first on 30 May and completed his fourth at 11:50 am this morning. He will run one every day, ending on 5 June.

The Finnleys Warriors campaign was set up by Bedford mum, Ali Neely-Hayes, after her son was diagnosed with Anaplastic Large Cell Lymphoma in 2017.

Finn was just 16 months old when he became ill with the rare condition that affects only 10 children a year.

On their Just Giving page the family said: ‘’Hearing the words ‘cancer’ and seeing your pride and joy suffering is the most painful thing in the world – but not as painful as what we knew our precious little boy was going through.’’

They aim “to raise as much money as possible to ensure more research is done to cure more cases of childhood cancer and develop the treatment so it is less painful for their little bodies.’’

Finn underwent numerous rounds of intensive treatments and chemotherapies but has been in remission for three-and-a-half years.  His family credit Children with Cancer UK for this and set up Finnley’s Warriors to raise funds.

Mike, who thrives on a physical challenge and loves helping others, chose the charity as it is close to his heart.

When planning his 2021 fitness challenge he said: “It needed to be bigger and bolder than anything I’ve done before, and a true challenge to emulate what these little warriors and their families go through every day.’’

He said: “Not all kids and families are as fortunate as Finn and lose their battle with cancer at such a young age with so much to live for.’’

He blamed a lack of funding and added that some treatments have not changed in 50 years.

Mike said raising awareness and funds is vital, “…so kids and their families can have a treatment option suited to children and give them the best possible chance of survival.”

Since 2017 Finnley’s Warriors have raised over £220,000 and Mike taking on this challenge is raising even more vital funds.

It was an early 5am breakfast for Mike today, who even managed to fit in a spot on BBC Radio 1 with a shout out from Gregg James. He also received  support from rugby players, and family friends, Sam and Joe Simmonds who posted to their instagram accounts.

Speaking to Mike today he said the epic challenge was going ”better than I thought it would’.  He anticipated being in more muscular pain but it’s his toes that have taken the most damage.

He has blisters the full length of his toes but said, ”If that’s the only pain I’ve got I’ll take that hands down.  It fails in comparison to what these kids go through.”

He was joined by Finn today who ran a couple of sections with him.

Keen to push to his physical limit, Mike thought this sounded like “one hell of a challenge’’ and also “slightly fun.’’

He was also inspired by three-time Olympic Gold medallist Pete Reed who suffered a spinal stroke in the navy and was left paralysed from the chest down.  Rather than Pete’s Olympic achievements, Mike said it was “his story of recovery, athlete mindset, motivation and mental toughness in whatever challenges you face or are faced with, that inspires me.

“The challenge might seem crazy, out of reach, even impossible but his attitude and focus demonstrates what can be achieved if you put your mind to it. This is what has inspired me to go ahead with the seven marathons in seven days for Finnley’s Warriors and Children with Cancer UK.

Three of Mike’s runs have taken place in Devon, with the remaining four in Bedford.

His last will be on 5 June and involves 17 laps of the 2.5km Parkrun track in Great Denham Park. Mike picked the spot as it is a good location for spectators and he is keen for the public to attend. ”Seeing anybody just spurs you on” he said.

It’s set to be a fun atmosphere, with the man himself, Finn, in attendance. Mike is keen for people to watch, join in and even throw things at him.

Hopefully he won’t regret saying that.