Local children have helped bring a joyful splash of colour to a street in Kempston, thanks to a collaboration between the Bedford Borough Parent Carer Form and local charity Creating Memories.

The community art project has brought the designs of 20 local children with special educational needs (SEND) to life with the help of artist Sarah Harrison and been captured by photographer, Tara Gillen.

And though the aim was to spread happiness and pride among the children taking part, the mural has done so much more, bringing joy to the wider community from neighbours and passers-by to putting a smile on the faces of the bin men on their weekly collection.

Kerri Rennie from the Bedford Borough Parent Carer Forum said: “I was inspired to contact Pritti to see how we could work together after seeing the positive reaction to her incredible pathway.

“We wanted to provide an opportunity to work with parent/carers and their families to be part of something big, communal and creative – something that would complement the education, support and information we offer through the Forum.

“I”m so delighted with the results.” 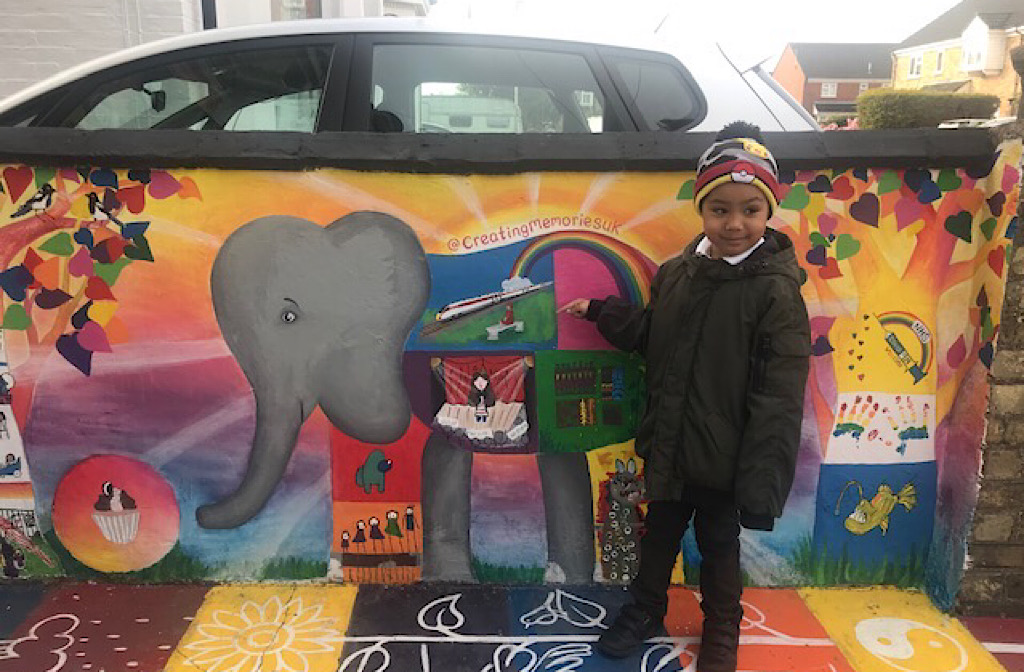 Artist, Sarah, came up with a plan to incorporate designs from 20 children into an image of Beatrice the elephant – named after the street in Kempston where the mural can be found.

Thanks to funding from Bedford Rotary Club and a donation of paint from Brewers Decorating Centre, the mural began to take shape – and became much bigger than the team had anticipated.

“As the images started to go on the wall it became apparent that we wouldn’t get them all on without making them much smaller, and that wasn’t an option,” said Pritti, who runs Creating Memories charity and owns the Beatrice Street house.

“It was decided to expand the mural to the archway of the house, which tied in beautifully with the path and the mural.”

Bedford’s creative community is at the heart of the project, with artist Sarah Harrison bringing the mural to life and local photographer, Tara Gillen, capturing it all.

“Tara came along with her daughter to take photos,” said Pritti. “She wanted to show her support and while she was here she revealed that she is a painter.”

Tara and her daughter were encouraged to get involved and ended up painting images on the wall. “Being part of the project brought them joy, stress relief and closer as mother and daughter,” said Pritti.

Retired artist, Paul Nicholson, also joined in. “He’d come along to take a picture of the progress of the mural and ended up painting a spontaneous tree trunk with carvings of our initials,” laughed Pritti.

Paul regularly walks from Queens Park to Kempston to watch the mural’s progress and was thrilled to be able to be part of it.

“To see her reaction on Friday was amazing,” said Pritti. “All the handmade items she brought to make Beatrice come alive have put the finishing touches to the project.”

“All of this started from Sarah and I meeting through a friend’s seedling swap,” said Pritti.

“It was a sunflower seed that connected us and that has led to almost a whole house of joy for all. The project has naturally grown and support has just emerged from those who want to be part of the joy.

“This project has just grown since its inception earlier this year and I can’t quite believe the finished result. Thanks to all the children for their masterpieces and to Kerri and Sarah for their desire to make this happen.

We have had so many visitors since this began and it is wonderful to meet with and connect with the local community over something so positive.”

Pritti told the Bedford Independent that the feedback since the launch of the mural on Friday has been amazing.

“We have had so many passersby in cars, in person, young and old stop to say how much they love it and that it brings them joy,” she said.

“We are looking to get children who pass by to do handprints on the wall so they can connect with the project and be part of it as it has bought them so much joy.”

Pritti and Sarah are aiming to continue the project of joy, so watch this space…