We’ll be updating this live blog as soon as the winners for each seat covered by the Bedford Independent is announced.

We’ll be with you from 10pm, as soon as the polls close and right through to the end, which is expected at 3am 13 December 2019

Full updates below. You may need to refresh the page for the latest updates. 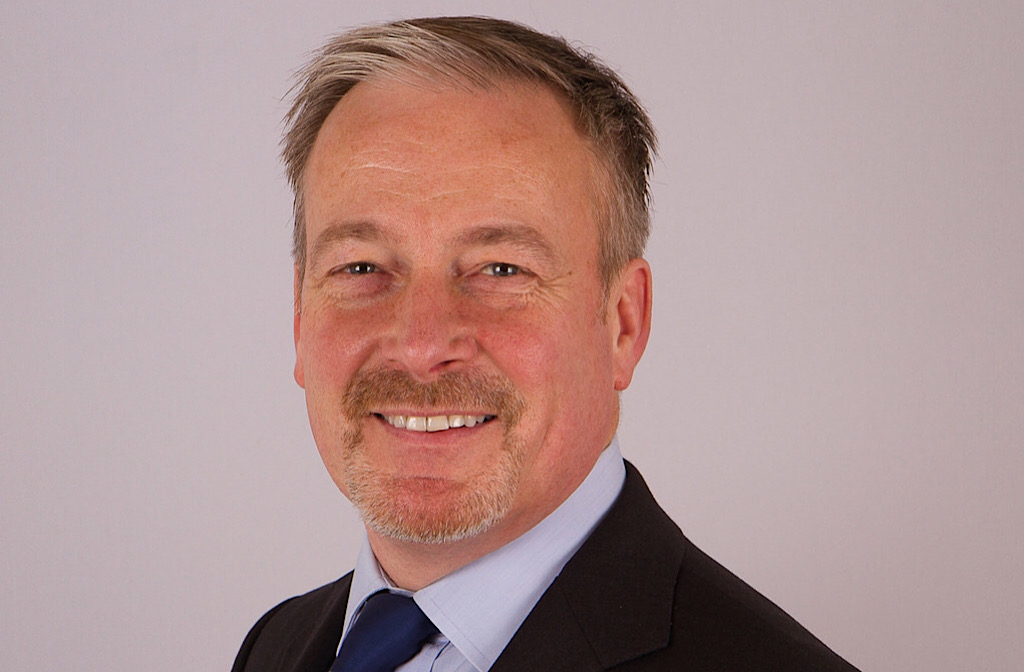 Phil Simpkins, acting returning officer has declared a result for Bedford. We’re waiting for it to be confirmed…

Second re-count in progress. Sources suggest there are just 140 votes in it.

An unofficial Labour source has said that it looks as though the party has edged ahead in Bedford & Kempston.

Always a close call, it could still go either way…

In other news, the Borough’s comms team have come up trumps… 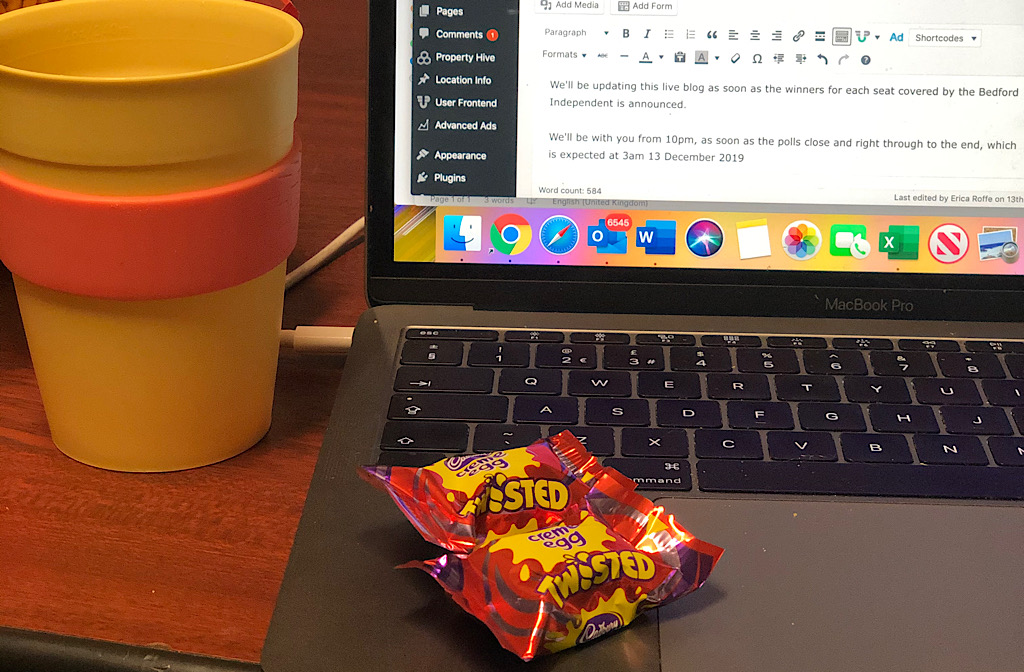 The TV crews are setting up around the stage in the media tent. It’s quite hard to hear the TV coverage over the sound of the rain hammering down onto the roof of the marquee and the whirr of the heaters. All glamour here! 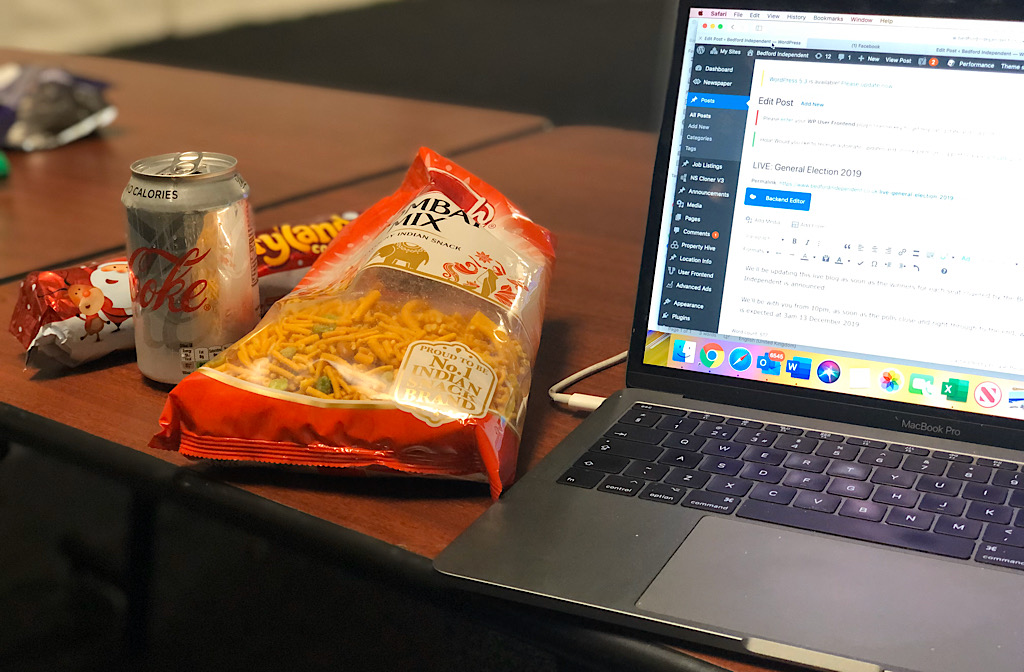 As he heads back down south to his Bedford home, we look forward to finding out what his political plans are for the future – and whether they’ll be closer to home…

I’m here, I’m teetotal and I’m driving, so hold off on the gin…  I do hear that Creme Eggs are available though, so if anyone’s passing the all-night garage, feel free to get me one (some)….(all of them)….

Well, that’s it from me for the night. I’m going home to bed, after a gin. Erica Roffe is taking over now, play nicely.

I’ve received so many offers of gin. Bedford is the BEST.

As you’ll know, it’s a tight race in Bedford between Conservatives and Labour. The Conservatives need just 0.8% swing to win. Talking to a few people from all parties here now, there’s a feeling from the floor that they may do it.

A reader tells us that they think the last count at the Corn Exchange was in 1997 when Blair won a Labour landslide. Any other suggestions?

No gin but lots of snacks and beer… Brewdog’s Independent Pale Ale, was an obvious choice. 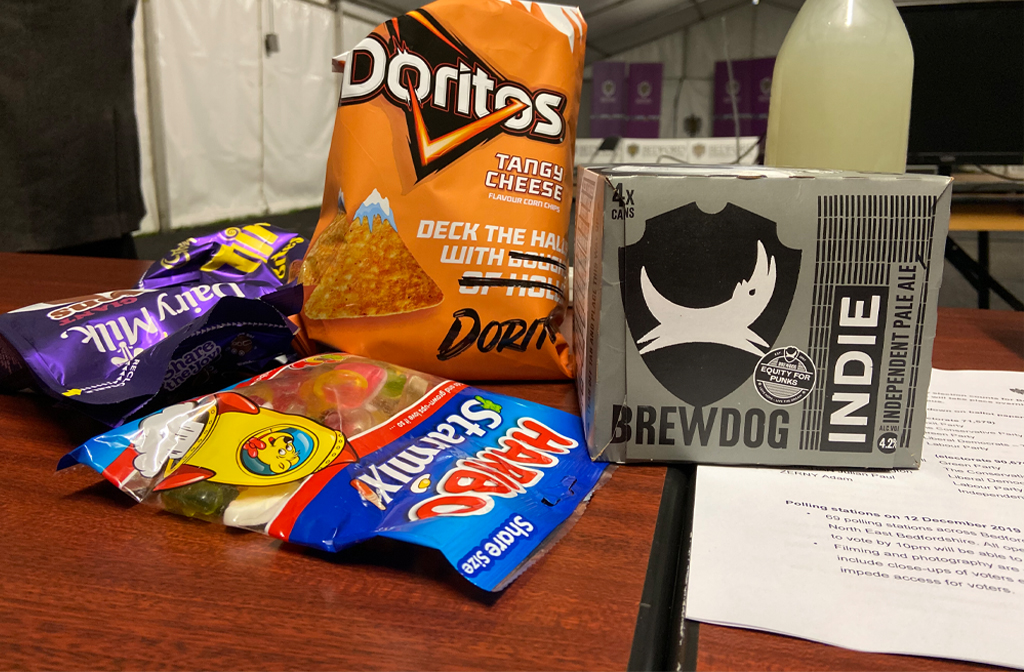 Vann (Lib Dem) and Spurrell (Green) seem to be the only candidates here so far.

Neither has brought us any gin.

Here’s a fun fact for you, since 1997, when the boundaries for Bedford & Kempston were changed, this constituency has reflected the national Government, apart from when Mohammad Yasin was elected in 2017.

Getting busy on the floor… absolutely freezing in the media tent. Lots of ice… no gin.

The first ballot box has arrived…

Just trying to work out when the last count at the Corn Exchange was. It was years ago, anyone remember counting votes there? Bedford Borough Council have also hosted counts at the Bunyan Centre before moving to the Uni of Beds for the Mayoral and Local Elections earlier this year.

Postal votes have arrived in their secure boxes. Count staff itching to get on with it but they can’t open them until 10pm.

National interest in Bedford as one of the marginal seats and battle grounds between Labour and Conservative. Rumours abound that there could be as few as 100 votes in it. Nail biting stuff.

Good evening, all. Paul Hutchinson here with you for the first part of this evening. Not much happening at the moment at the University of Bedfordshire, plus the media have been relegated to a tent outside. It’s cold, but that’s ok because it’ll mean my gin stays cold.