Schools across Bedford are releasing their GCSE results today, amid further controversy at how grades for some students have been worked out.

While it was agreed last week that GCSEs would be worked out on teacher assessments, it wasn’t until late yesterday that BTec students would not get their results today.

They said they will be re-grading all its BTecs to bring them in line with the way A-levels and GCSEs results have been worked out in response to the coronavirus lockdown.

Pearson has apologised for the “additional uncertainty” the delay would cause.

Locally, we’re still waiting for the full picture to emerge but individually schools are announcing their grades gradually and we will be posting these live as they come in.

Rushmoor recorded 98% of all grades at 4-9, with St Andrew’s at 93%. Notable subjects include 100% of pupils achieving a grade 4-9 in: Art, Biology, Drama, French, Geography, Further Maths, Photography and Music.

A spokesperson for the school added: “The confusion around exam grades this year has led to a significant amount of anxiety for children across the UK.

“However, we have been impressed by the attitude of our extremely hard working Year 11 cohort. The grades they have received reflects the progress they had made up until the beginning of the Covid lockdown.

“Following this excellent set of results, a large number of students will be joining our vibrant and rapidly expanding Sixth Form.

“The future for many is still unknown, so if you are looking for a truly nurturing and personal sixth form, where individual needs are met, we still have a small number of places available for September. ”

“This has been one of the most difficult years for students who have been denied the chance to show how well they can do in their exams,” said a spokesperson for Mark Rutherford School.

However, the school has announced some “fabulous individual successes”:

Mrs Bloor, Headteacher added “We are very proud of what our students have achieved.

“Congratulations to all the students and staff for their hard work; this has been a really difficult time for students but we feel that the outcomes reflect the talent and ability of our students which has resulted in such positive results.

“They have had such a challenging year and deserve their success, I wish them well in their future endeavours and look forward to welcoming many of them back into our highly successful sixth form”.

Over 95% of students were able to attend in person to collect their GCSE results at Castle Newnham, with staff saying it was “great to see them again after so long”.

A statement from the school said: “We are so proud of our first cohort of Year 11 pupils and the work they have done with their dedicated teachers to achieve their GCSE results.

“This year’s process was not at all as we or any other school could have envisaged but the years of hard work, enthusiasm and enjoyment of learning at Castle Newnham are in no way diminished by the unusual events at the very end.

“We now aim to support each of our pupils onto the next stage of their education or preparation for work and wish every success to all.

“We thank all of our pupils and parents for their magnificent efforts and contribution.”

“I’d like to congratulate all our students on their richly deserved GCSE results,” said Andrew Hencken, Academy Principal at Lincroft Academy.

“Their success is testament not only to their hard work and dedication, but the excellent teaching and commitment of all our staff at Lincroft Academy”.

Amongst some of the individual successes at Lincroft this year were:

“My thanks go to all our students for everything they have done for the academy during their time here,” continued Andrew.

“Many of the students will now continue their studies at the SAF sixth form at Sharnbrook Academy.

“I would like to wish them and all of the students who made up our very first cohort of Year 11s the very best as they move on to their next chapter wherever that may be”.

Staff at at Sharnbrook Academy congratulated their students after receiving their “well-deserved” GCSE results.

Some of the stand-out performances from students at the academy include:

Clare Raku, Academy Principal at Sharnbrook Academy, said: “Despite the disruption and uncertainty of this year, our Year 11 students have remained positive, focused and determined throughout.

“We are delighted that the vast majority of our students have been awarded the grades that they need to move onto the next stage of their education, training or employment.

“We are [also] looking forward to welcoming back so many of our students to our sixth form in September.” 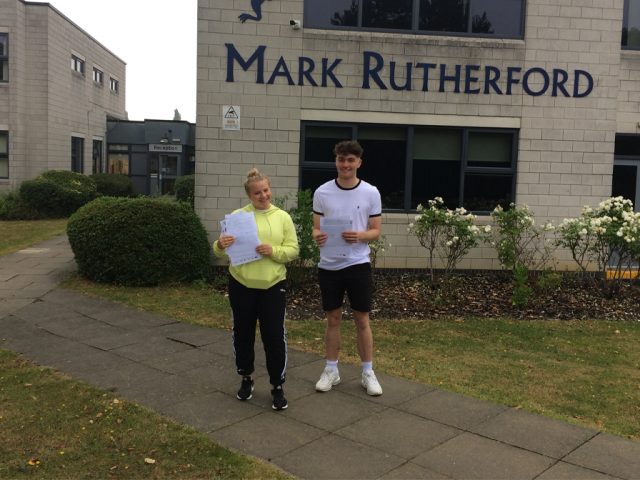 As schools in Bedford prepare to reopen, ‘safety of children and staff is our priority’ says Council