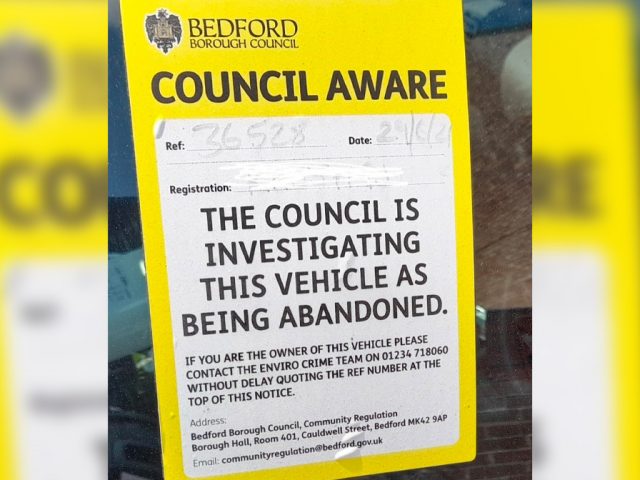 Do you ever notice something amiss in Bedford and think “Somebody should report that to the council”?

Do we just rely on council staff to notice things for themselves? Do we trust our local authority to have procedures in place to take care of things so that we don’t have to?

Well, that‘s pretty much what I thought. Until I started my long-term relationship with ‘the abandoned car’.

‘The abandoned car’ is a regular feature of my walks to the shops or to the North Wing of the hospital and has been so for the best part of a year now.

It’s been sitting in the same place with its fading yellow sticker to say that the council is investigating the matter.

The car occasionally attracts would-be suitors who adorn it with a sheet of A4 paper and their mobile phone numbers hoping, in true Bagpuss manner, that one day its owner will remember it.

I’ve never taken any action on it as I neither live nor drive nor park in the street where ‘the abandoned car’ has taken up residence.

As summer turned to autumn, autumn to winter and winter to spring, still this landmark appeared on my walks but then I found out about a parking regulation that I had never known before.

Like most drivers, I thought that your car’s tyres need to be touching double yellow lines before it’s classed as parking ‘on’ them. Wrong! If your vehicle is overhanging the lines in any way, you can be fined.

This has added a new dimension to the tale of ‘the abandoned car’. The space behind it is about large enough for a Fiat 500 or similar small vehicle but anything bigger could see the owner landed with a fine.

Now, as I said before, it is actually none of my concern but I am disappointed that Bedford Borough Council doesn’t keep tabs on errant vehicles such as this.

Thus, I thought this piece of writing would send out two messages:

1) Firstly, Bedford BC, could you please follow up on the things you claim to be investigating?

2) Secondly, happy anniversary ‘Abandoned Car’. On  29/6/22 you’ll be celebrating ONE YEAR of wearing that sticker in your place of residence.

Oh, and if any residents of Goldington Avenue would like to follow this up, feel free to use the email address at the bottom of the sticker.