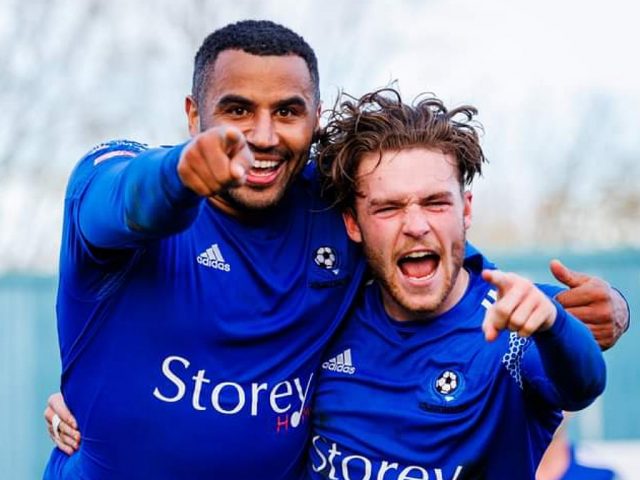 Bedford Town have been on the right side of some last minute dramas this season and once again pulled the rabbit out of the hat in the final moments at Welwyn Garden City in a key win for the league title.

The Southern League Central Division One campaign has been a two horse race for the majority, but the Eagles are going to need a calamity to lose from here as they go five points clear at the top.

Their 2-1 win would have seen them six points clear, only for chasing Berkhamsted to steal a point in dramatic fashion at Ware to cling on by their fingertips in the title race.

Both sides faced potential banana skins this afternoon; Welwyn Garden City beginning the day in third and they certainly showed their class in a solid first half display at the Utilita Stadium.

Matt Ball gave the hosts a deserved lead half way through the first half after Charley Sanders had a goal disallowed with Bedford Town quickly becoming frustrated and picking up frequent yellow cards.

Rene Howe, who has been uncharacteristically quiet in recent weeks, had a golden opportunity to equalise from the penalty spot but Welwyn keeper, Charlie Crowley guessed right to deny the Eagles talisman.

A game that had everything ends with familiar result

Howe’s day did not get much better as he hit the post, and with Connor Tomlinson missing a couple of guilt-edged chances, it seemed that Gary Setchell’s luck had run out on him.

However, the last twenty minutes turned into an action-packed affair, beginning with Howe getting his goal – his 30th of the season – to gain a hugely important equaliser.

Moments later, Charley Sanders was shown a second yellow followed by a red to compound the nerves for Gary Setchell’s side and a good number of travelling Town supporters.

But Bedford Town have found a way to keep going until the very end; games against Ware and Canvey Island showing that they are a fair bet for a late winner and this afternoon was no different.

With the clock ticking over to 92 minutes, Dan Walker latched on to a wayward Welwyn clearance to lob the keeper from the edge of the area to send the Bedford dugout into raptures.

Berkhamsted recovered from 3-1 down at a dangerous Ware side to secure a point to hang on to the coat tails of the Eagles but there are now only three games for them to stage a miraculous recovery and spoil the party at The Eyrie.

It’s been many years since Bedford Town last secured a league title, and they can secure it next week if results go their way as they host AFC Dunstable at The Eyrie.

Eagles fans may be putting the champagne on ice, but Gary Setchell will be keen to keep his side’s feet firmly on the ground and see out what has been a gruelling Southern League campaign.