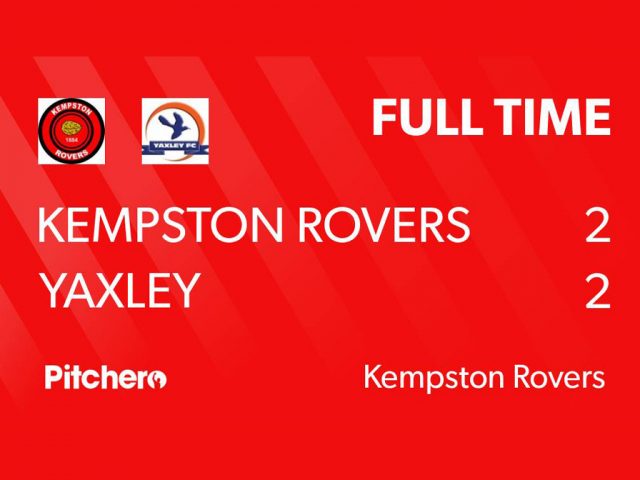 Kempston Rovers‘ first home encounter of the new year went off with a bang as three goals in five minutes in the first half left spectators breathless.

It was the visitors that got things started and Fraser Sturgess could have given them a tenth minute lead, but his stabbed shot was comfortable for Knox to deal with.

Sturgess found himself in the book moments later for cynically stopping a counter attack.

Both Nathan Tshikuna and Daniel Akubuine had long range efforts fly wide before in the nineteenth minute, Rovers broke the deadlock. Tshikuna crossed in toward Scott Joseph, there was suspicions of handball against a Yaxley player as he blocked the shot, but the ball broke to edge of the box, where it was met by Dan Clifton.

The midfielder, on his debut, lashed an effort in off the far post, Blake in the Yaxley goal getting fingertips to it but not enough to deny the goal. The celebrations had barely died down when Yaxley struck back.

A dangerous ball in caused confusion and a scramble in the Rovers box. The ball was half cleared to edge of the box, where Cotton struck a shot that looked to be going wide until Sturgess lunged in to divert the ball past Knox.

Parity lasted for eighty seven seconds as Harlem Sambu crossed for Izale McLeod, who controlled and turned his man before trying to find the far corner. His effort was charged down but fell kindly for Shane Bush to smash home the loose ball to put Kempston back in front.

After the mad five minutes, the game calmed down. Ross Watson volleyed wide from the edge of the box for Yaxley before Kempston began to reassert themselves.

Terrific interplay between Tshikuna, Joseph and Bush led to a cross from the right hand side toward McLeod, who was free in the box, but the ball fell to his weaker left foot and he couldn’t find the accuracy that he is famous for.

Late in the half, an innocuous free kick was conceded by Rovers, allowing Yaxley to pump the ball long into the box. Under pressure from his man, Shane Bush was adjudged to have handled the ball to give Yaxley a penalty.

Dan Cotton duly dispatched the spot kick low to the keeper’s right with a venomous shot. In first half stoppage time, Harris was the second Yaxley name in the book for shoving Jordan Wright to the floor.

As the two sides left the field at the break, the Yaxley management were making it clear to the referee that they felt the handball for the penalty was deliberate and should have merited further action from the officials.

Early in the second half, Charley Saunders became the third Yaxley player in the book. The defender bundled Izale McLeod to the floor as he was about to go clean through on goal, perhaps lucky to only receive a yellow card.

The second half was unable to match the pace of the first and it took until after the hour mark for the first effort on goal in the second period. McLeod shooting through a crowd of bodies but comfortably enough for Blake to make the save.

Shane Bush found himself in the referee’s notebook after a sliding challenge that seemed to win the ball. Nathan Tshikuna and McLeod both had chances to put Rovers in front for a third time, but neither could find the target.

With fifteen minutes to go, Carl Knox spilt a cross shot that caused a momentary panic in the Rovers area, but the danger was cleared without any trouble to the goal. In the seventy seventh minute, Saunders was at the centre of things again, a late challenge drew a second yellow card from the referee and he was duly dismissed.

From the resulting free kick, Tshikuna’s low curling effort needed to be cleared off the line by a Yaxley body. As Rovers looked to press the man advantage, Bush had a long shot saved well before minutes later he drew another save from Blake from closer range.

In stoppage time McLeod fired wide from a Joseph cross before a lovely move resulted in another Joseph cross, which was nodded down into the path of McLeod by Bush.

McLeod’s snap shot forced Blake into a full stretch save to deny Kempston all three points. The shot was the last action of the game, as the referee blew for time after Blake had made the save.

Rovers remain in seventeenth place, but inch away from the bottom two positions. The next battle in Tony Joyce’ revolution is next weekend as they travel to Coleshill Town. 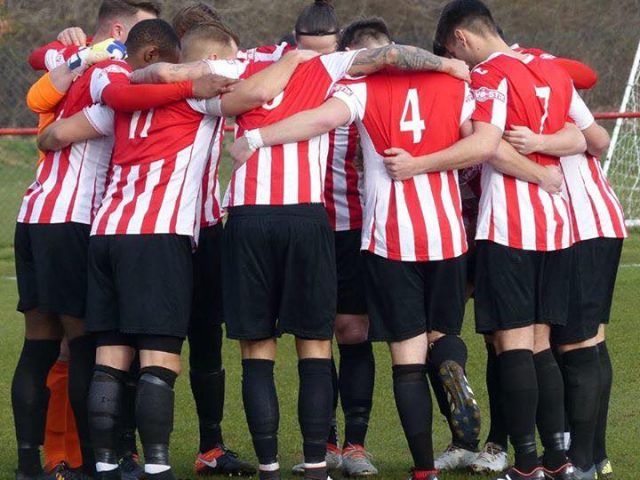