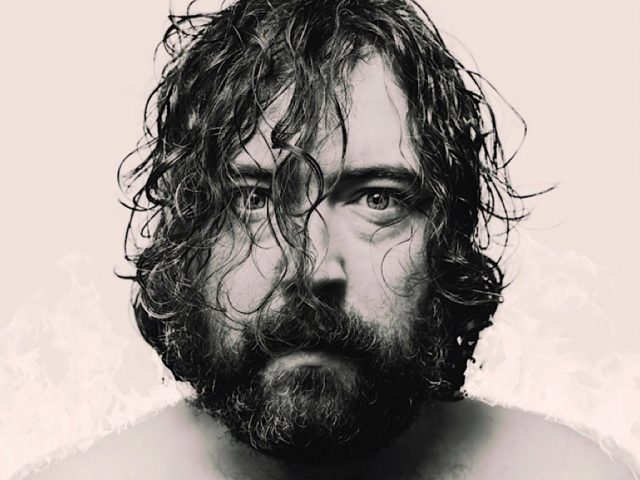 Always a man who likes an incendiary show title, Phoenix From The Flames represents Nick Helm’s return to something like his old self, and he’ll be bringing it to Bedford’s Quarry Theatre on Friday 24 April.

The man who starred in BBC Three’s wonderfully charming Uncle, fronted a food programme for Dave entitled Eat Your Heart Out, and has appeared in two series of Romesh Ranganathan’s Sky sitcom The Reluctant Landlord, has always given off the vibe that just about anything could happen during one of his live extravaganzas.

You don’t go along to a show with titles such as One-Man Mega Myth or This Means War! and expect to see a shy, retiring wallflower. Yet, for his 2017 touring show, There Is Nothing You Can Do To Me That I Haven’t Already Done To Myself, Nick delivered a set that was much more stripped back and intimate, with a few songs breaking up what was effectively a storytelling affair.

He insists that after his break from live comedy, he is now ready to get back to his roots. “I’m known for doing shows with production numbers and costume changes and props and a set. After the tour, which I really enjoyed, I did miss doing a proper old-school show, so this is me going back to what I started doing.”

The onstage Nick Helm is a very different animal from the polite and quietly spoken offstage man. A bombastic and in-your-face performer, there are few holds being barred when he lunges into full flow.

There is a very good reason for him becoming such an unstoppable force of nature once the curtain goes up. “I do get very nervous and stressed before a show, and the day of a gig can be a complete write-off. That is why my act is the way it is. I get nervous all day and bottle all this tension and then I go on stage and let it all out. I’m veryloud.”

As far away from the definition of a one-trick pony as it’s possible to get, Nick Helm is equally at home writing music, making short films, penning poetry and doing a bit of acting, as he is on stage working his stand-up magic.

“When you need a break in one area, you just go and do something else. I have lots of different creative outlets. And that’s really what Phoenix From The Flames is all about: it’s about rising back from the year I’ve had.

“I had an up and down year personally; I suffered from mental-health issues and depression, but I’m now coming back to being my best self and bouncing back in an Alan Partridge-esque way. It’s really a tongue in cheek look at my life.”

With more people in the public eye willing to talk about the mental health issues which affect themselves or those closest to them, there’s certainly no reason why comedians shouldn’t be tackling these issues head-on as well.

“The last show was very personal and I’ve always dealt with depression in my comedy,” says Nick. “Before, I’d maybe have a one-liner about depression but as I’ve improved as a stand-up I can get up on stage and talk about my experiences and make that funny rather than just having some jokes that I’d try to get into my set.”

For Nick, this feels like a more honest approach to both the subject and to his craft as a stand-up comic.

“I have a lot of friends who suffer from mental health issues. I think it’s possible to talk about these issues without it being morbid. So, this will be another personal show. But it’s OK, it’s still going to be a good night out!”

Treating audiences to many a good night out has led Nick Helm to creating a live comedy career that has pleased critics and award judges as well as the public at large.

Among the accolades he has received for his live shows are Best Breakthrough Artist at The British Comedy Awards, Best Music And Variety Artist from Chortle, and Best Newcomer from the Loaded LAFTAs, while he also scooped the Dave Joke Of The Fringe Award in Edinburgh in 2011 for a gag (which he actually attributed to his dad) about Snow White and her Seven Dwarves (look it up, it’s a clever one).

But Nick Helm is never likely to rest on any such laurels.

A consummate professional and hard worker who always strives to get better as a comedian, he is a close reader of his own product. “The percentage of actual stand-up has crept up a bit over the years.

“For Phoenix From The Flames, I have to work out how many songs I want in and how many poems I want in, and how much stand-up I want to do.

“You’ve got a pile of songs and poems over here, a pile of jokes and stories over here, and a pile of props over there. The process of working it all through is like having a bucket of Lego and throwing it all over the floor: you can do whatever you want with all those pieces.”

And as he will no doubt prove once again, with Phoenix From The Flames, Nick Helm just can’t stop giving audiences exactly what they want.