Public health experts in Bedford are expecting a high Covid-19 (coronavirus) death toll to continue for several more weeks as an infection bulge works its way through into hospitalisations.

But in a “good news, bad news” presentation, councillors heard that the infection rate is falling, people are being given more money to self isolate, and vaccination of the borough’s 70-74 year olds and high risk people is on track to begin soon.

It has also been confirmed that a national vaccination centre will be opening at Bedford Heights next week.

Figures presented at a meeting yesterday (Thursday) revealed that Bedford Borough’s rolling weekly toll of family tragedies had jumped by 22 people in just seven days to reach a pandemic high of 46.

Ian Brown, Bedford Borough Council’s chief officer of public health, showed councillors a graph that revealed there were more than 80 total confirmed registered deaths from all causes in the second week of January, when there would normally be fewer than 40.

Mr Brown: “The bad news is the huge increase in covid-related deaths that we’ve seen this week.

“Sadly, we’ve had 46 deaths in the week ending January 15, that is up 22 deaths on the previous week and is the highest number of deaths related to covid that we’ve recorded in a single week since the start of the pandemic.

“Sadly, because of the nature of the delay between cases becoming infected, becoming hospitalised, becoming very unwell and then sadly dying, we would expect very high rates of deaths to continue for several weeks yet while our case rate remains high.” 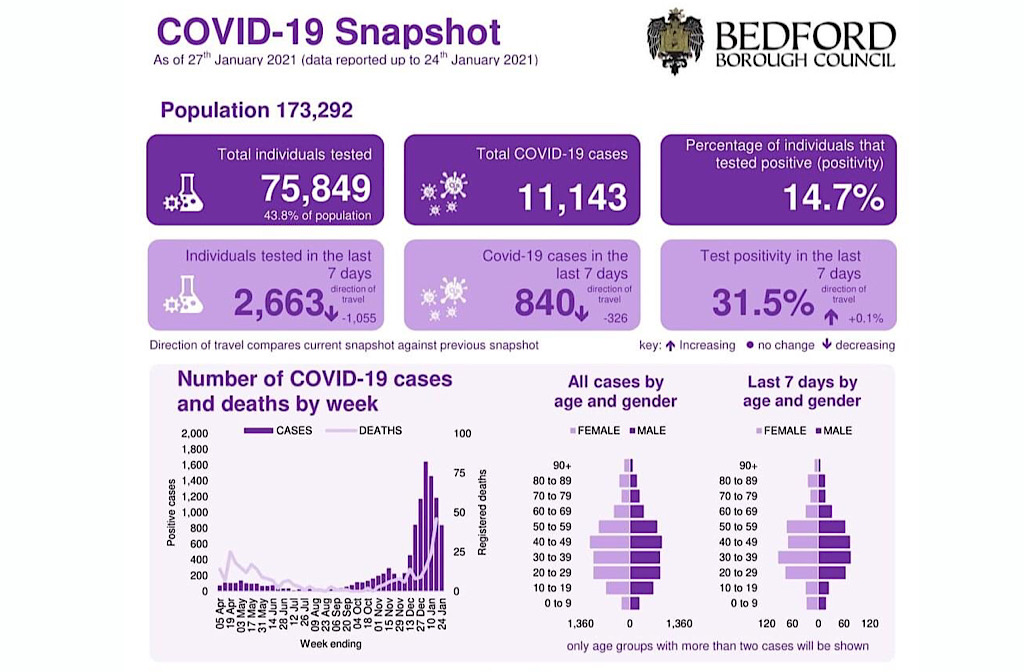 Mr Brown said the infection rate is falling stubbornly slowly especially in the ethnic minority communities and among “non British whites” who have no choice but to go to work in lower paid jobs.

The council has decided to top up the Government’s £500 grant to £700 to make it easier for people working in certain low income jobs to be able to self-isolate.

Mr Brown estimated that if the current rate of decline continues it will take until about the middle of February before Bedford is back to the rates of infection seen at the end of November. 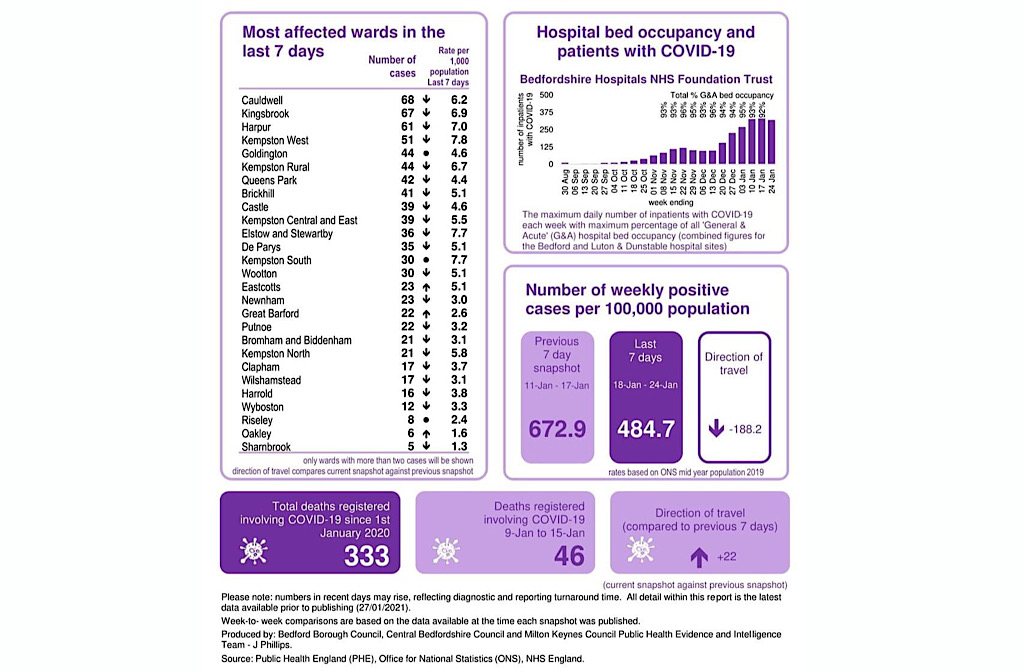 He reinforced the Government’s stay at home message and added if people have to go out they should be keeping a minimum of 2m (6 ft) away from others.

He also reinforced the hand hygiene message by asking people to think about not sharing objects like cups or lighters which could be harbouring the virus.

“We do know that transmission happens when people share objects, a cup or a lighter for example,” he said.

Cllr Louise Jackson (Lab, Harpur), the council’s portfolio holder for health and wellbeing said: “This isn’t going away quickly, we’re in this for the long haul.

“The death statistics are incredibly difficult to listen to and my condolences to anybody who’s been impacted or has lost a loved one, or is suffering with the ill effects of covid.

“It clearly is a nasty and unpredictable illness.”