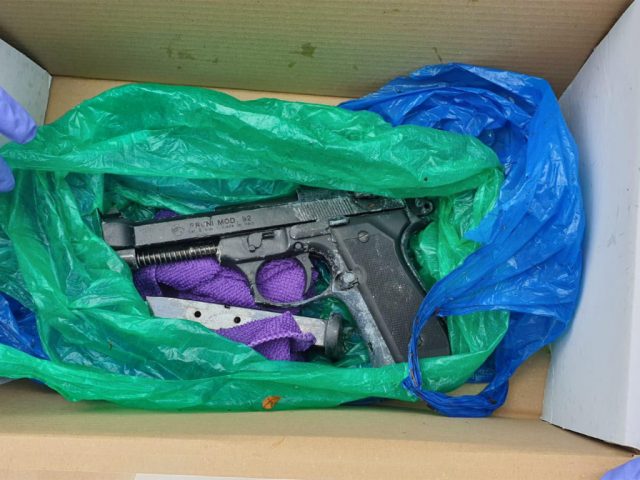 The gun was found while searching undergrowth on the Slipe between Kempston and Queen’s Park following concerns about anti-social behaviour and drug dealing in the area.

Officers recovered the gun wrapped in a towel and carrier bags and after testing was was deemed to be a viable firearm.

It will now be examined for forensic opportunities.

They were questioned while in police custody but have since been released on bail while enquiries are ongoing.

Sergeant Luke Blackburn from Boson said: “I am pleased we have been able to take a dangerous weapon off the streets.

“We’ll now be looking at potential forensic opportunities which may help us find out who the gun belongs to and why it was there.

“Hiding a gun in a public place is incredibly irresponsible, and I am glad we seized this weapon before anyone else could get to it.

“If you do have a weapon you want to dispose of, please leave it in a safe and secure place by taking it to one of the many weapons bins across Bedfordshire.

“Although the gun was found to be viable, we don’t have any information to suggest that it was there to cause harm to the wider public.

“I hope this reassures local residents, who will understandably be concerned by yesterday’s find. Please be assured that our dedicated team is working hard to tackle those who carry weapons or try to cause harm in our communities.

“These weapons sweeps took place because we had information to suggest criminality was happening in the area,” continues Sergeant Blackburn.

“Information from our communities is vital in helping us build up a picture of activity in an area, whether that’s about anti-social behaviour, drug criminality, gang criminality and knife crime.

“We can’t tackle issues unless we know about them, so I would urge the public to report issues.

“If you don’t feel confident speaking to us directly, you can speak to Crimestoppers who are an independent charity, and you can remain completely anonymous.”

Bedfordshire Police urge anyone with any information about firearms in their area, including information about anyone who may be in possession of one, to report information by contacting independent charity Crimestoppers, anonymously, on 0800 555 111.

Or you can visit www.crimestoppers-uk.org. Your IP address and location are not tracked by Crimestoppers.

A list of weapons bins in Bedfordshire is available at www.bedfordshire.police.uk, by searching ‘weapons bins’.