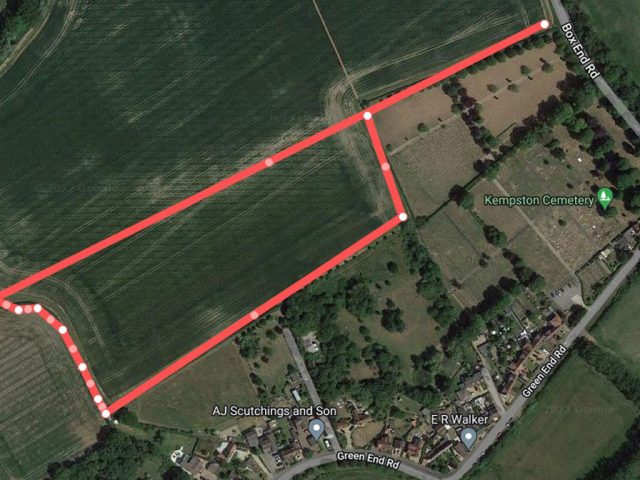 A cemetery for the Muslim faith is set to be built in Kempston after Bedford Borough Council gave the plans the green light.

The council’s planning committee voted in favour of the plans for land at  Box End, Green End Road, Kempston at a meeting on Monday (18 July).

The planning application (21/03110/MAF) sought to change the use of agricultural land to a cemetery for the Muslim faith with a capacity of 4,856 graves, a two-story administration building, and a car park.

The site is located to the west of Box End Road and the existing Kempston Cemetery and comprises approximately 3.7 hectares of agricultural land.

Speaking in support of the application, councillor Nesreen Akhtar (Labour, Queens Park) told the committee that current council provisions do not meet the Muslim community’s needs.

“For example, they do not offer seven days a week burial services, Muslims need to bury their deceased as soon as possible,” she said.

“Another issue is that plots are offered on a leasehold of 70 years, Muslims do not want their loved ones disturbed and need a freehold provision.

“The fact that the project is self-funded indicates that it is a need in the Muslim community, our MP, Mohammed Yassin, is also fully in support of this application,” she said.

He said: “The place of burial is very important to our faith communities, the Christian community can access consecrated burial space in Bedford, and that kind of facility must be offered to our other faith communities.

“I believe that the planning department have dealt with any concerns and dealt with the application in a very considered manner.

“And that gives me reassurance that this will be [well] managed and offer a very important provision for our Muslim community,” he said.

Committee member, councillor Sue Oliver (Labour, Kempston North), said she was on a committee that looked at trialling Saturday burials.

“I learned first-hand about how much such a facility is needed by the community,” she said.

All seven eligible committee members voted to pass the application subject to conditions laid down.

However, she left the committee room for this agenda item as her husband is a member of the applicant’s committee.

She was therefore disqualified from taking part, as set out in the council’s constitution.