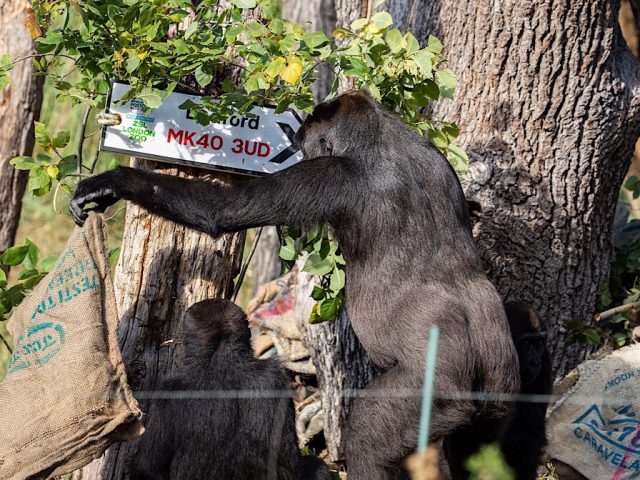 A Bedford couple are celebrating after winning £60,000 with the People’s Postcode Lottery after gorillas at ZSL London Zoo revealed their postcode as the latest winner.

To celebrate World Gorilla Day (24 September), the conservation charity ZSL (Zoological Society of London), which is supported by funding raised by the players of, arranged for its troop of western lowland gorillas to reveal the day’s winning postcode.

The lucky Bedford couple, who play with the winning postcode, MK40 3UD, landed the incredible cash prize of £60,000.

Steven Cunningham, 42, has played People’s Postcode Lottery since 2017 and encouraged his wife Louise to join in October last year.

Louise, 41, a special educational needs co-ordinator, said: “My husband has been playing for a couple of years and kept winning here and there, so I thought I’d sign-up.

“Knowing a big chunk of the money goes to charity was also very appealing.

“It’s not the sort of thing that happens every day but is absolutely fantastic.”

The couple plan to spend some of the money on a dream holiday.

“It means we can take our two young children away to Florida next year and enjoy our dream holiday as a family,” said Louise.

“We also hope to use the prize money to tidy up a few home improvements including finishing our extension and getting a new driveway.”

A minimum of 32% of ticket sales goes directly to charities, with more than £474 million to date raised for good causes across Great Britain and internationally.

ZSL is one of the charities that have been supported, receiving £600,000 for its work to protect endangered species, including gorillas, from extinction.

Dan Simmonds, head of primates at ZSL, said: “Our band of six Western-lowland gorillas are highly intelligent and curious mammals so it was fascinating to see them investigate the new installation in their enclosure and announce the Postcode Lottery winners on World Gorilla Day.”