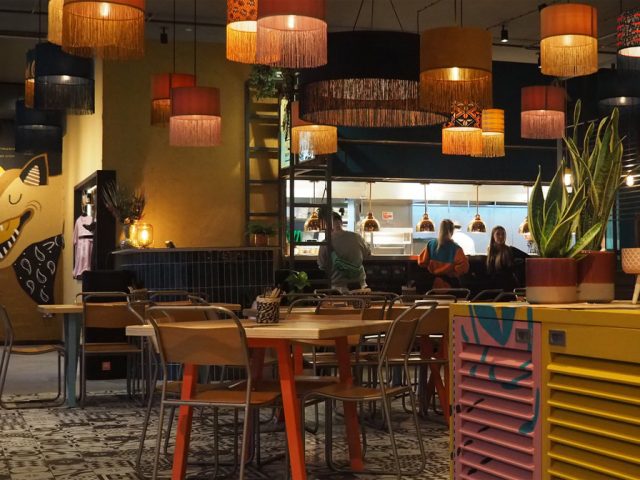 The new restaurant has become a symbol of adversity during the pandemic, having started as a lockdown delivery service during lockdown.

Now, Foxy Wings are a 100 seater bar and restaurant, after a successful Crowdfunder campaign that raised over £45k, 200% of their goal.

All this while contending with the global pandemic, supply shortages, legal challenges and seven children aged five and under between the four directors.

The new venue promises the best free-range chicken and cauli wings, together with their range of homemade sauces that take inspiration from South and East Asia and beyond.

While their opening menu starts with many of the dishes familiar from their home kitchen days, the team say they’re keen to add to their menu once they settle into their new surroundings.

”Our menu is bursting full of flavour with new additions like the smokey buffanero sauce taking inspiration from classic hot and spicy buffalo sauces, as well as the old favourites like espresso BBQ sauce,” said Jamie Pearson, one of the brothers behind the menu.

A work of art

Foxy Wings have also created a truly unique venue filled with personal touches and stories of other independent traders and producers from the town and around the UK.

This includes two wall murals from local artist Katie Allen, who designed the original Foxy Fox and a colourful origami lampshade from OrigamiEST.

This has created a large but intimate space with little touches from friends and family such as the bespoke patterned tables, displays of dried hops and flowers and hand-painted plant pots around the restaurant.

Co-founder Gabs Pearson said: “We focussed on the bright colours we used from our original Katie Allen fox and infused it with warm Indian tones to create a welcoming space.”

Read: The fox is in the henhouse as new Riverside North restaurant signs lease

Beer fans will also be pleased to hear that another of Foxy Wings’ partners is Tim Edwards of Beerfly who has curated the restaurant’s selection of 12 draught beers.

One of which is their own ‘Fantastic Mr Hops’ from Three Hills microbrewery near Rushden.

There is also alcohol-free beer, Lucky Saint, and a gluten-free beer, Hoptical Illusion from Brass Castle, on tap, as well as local ciders and six changing beers taps showcasing the best modern beers from around the UK.

Tom Faden of ‘Bears and Tails’ has also curated a cocktail list and John Barnes at The Flying Cork has also pulled together a wine list, both of which will match the food menu perfectly.