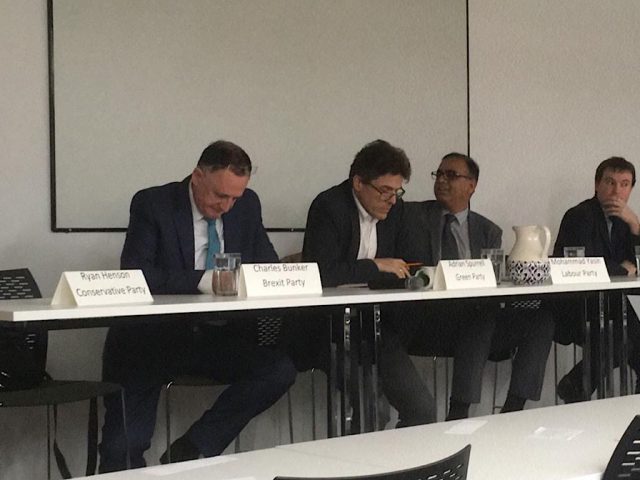 A climate change hustings took place in Bedford on Friday evening and one candidate was conspicuous by their absence.

The event, organised by Bedford’s YouthStrike4Climate movement, was held at the University of Bedfordshire’s Polhill Avenue campus and was attended by candidates from the Brexit, Green, Labour and Lib Dem parties.

Organiser, Elise Patterson said, “The hustings went very well. Four of the five parties invited turned up, the only party not present being the Conservatives.

“All representatives expressed their deepest concerns for the climate emergency. Everyone was given the same time for opening statements, answering questions, and closing statements.

“Having the opportunity to meet our local representatives made me very happy, and having the chance to really understand what each party stood for was rewarding.

“As a young person, it really gave me a chance to understand what position the climate crisis takes in each parties’ priorities, and showed me which parties we should be supporting in terms of the climate crisis, and being part of the student climate network.”

Mohammad Yasin, Labour’s candidate for Bedford and Kempston, said, “It’s disappointing Ryan Henson didn’t turn up.  Climate change is an important issue for many people in Bedford and Kempston and it’s very disrespectful to the members of the public who turned up expecting to hear the two main parties debate our policies on climate change.

“We had a good debate at the husting earlier this week.  It was combative and Ryan was given a tough time by the other opponents – that may have frightened him off.”

The Lib Dem’s Henry Vann said: “A massive well done to the young people who organised the hustings so expertly; they are an inspiration to those of us who have spent our lives fighting to raise climate change up the political agenda.

“It is disappointing not to have a Conservative candidate present but it should now be clear that the Liberal Democrats are not only the strongest Remain party but also have a track record of tackling climate change.

“This is the most important issue facing humanity – I am proud to have declared a climate emergency at Bedford Borough Council reaffirming our plan to be net-zero-carbon by 2030, and that we have reduced carbon emissions from our buildings by 62%.”

Green party candidate, Adrian Spurrell said, “I was honoured to steward the Youth Strike on Friday and then to be invited to their Environmental Hustings.

“All of us owe a huge debt of gratitude to the Youth Strikers.  Through their selfless action over the year the environment – the biggest existential threat to humanity – has been catapulted to the top of the political agenda.  At least it has in Bedford. Government action has been woeful to date.

“It is why a Green vote is critical – everywhere, no matter who you think will win in your constituency.  The more we all vote Green , the more politicians will have to take notice and do something.  It is our only chance of avoiding irreversible global heating and all the disastrous consequences that come with it.”

Charles Bunker from the Brexit Party said, “The hustings were brilliantly organised and beautifully timed as the election focused its attention on the climate emergency.  I was, at first, critical of our students going on strike but the evening made me realise how inadequate the policies of the two main political parties are to the climate emergency.

“If the people of Bedford are serious about the climate change emergency then there is only one candidate who understands the technology which will help solve the crisis, and that’s me.

“I have stood on broken wave energy machines in Aberdeen to learn of the technology, been to Peru and studied the feasibility of financing a major hydro-electric power scheme, worked on tidal and bio-energy schemes in Canada, worked on the business strategy for jatropha bio-fuels, was involved in a scheme to plant 6,000 hectares of indigenous trees in Ghana, worked on a solar electricity generation scheme in Devon/ Cornwall, completed a major desktop study on food security, been involved in the financial appraisal of tidal lagoons on the River Severn, been to York University to examine a technology which allows all domestic waste to been recycled, including non-recyclable disposable cups, and visited a prototype plant in Oxfordshire to consider the refinancing of an industrial plasma arc gasification plant for the treatment of municipal waste.

“The climate change industrial complex will be able to make a significant contribution to the emergency, but it will take people in parliament who truly understand the business and technology problems to make sure that these are put into effect. I am that person.”

Explaining his absence, the Conservative’s Ryan Henson said, “I had given a commitment to attend another event at the same time and didn’t want to break my promise to that group.

“Had I been given more than nine days’ notice I may have been able to rearrange. I did send a written statement which I was assured would be read out.

“I work for an international aid charity that has campaigned for years about the impact of climate change on the world. I care passionately about preserving our environment and if elected I will put the need to tackle the climate emergency at the core of all I do.”