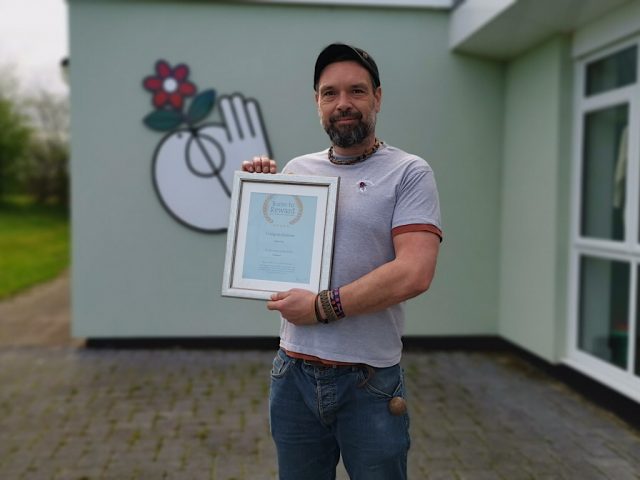 A formerly homeless Bedford man has been recognised with a national Emmaus Hidden Heroes Award, run in partnership with Room to Reward.

Christian Coley was nominated for the award for his volunteer work helping local rough sleepers.

The Bedfordshire charity gave him a place to live and the support he needed to turn his life around.

Christian is now heavily involved with volunteering in Bedford and Northampton town centres, and he is a key member of the Emmaus ‘Rucksack Stomp’: a team of formerly homeless men which regularly visits each town, carrying large rucksacks filled with food and useful supplies to hand out.

Hidden Heroes Award nominees are put forward based on their commitment, dedication and determination to go above and beyond to increase the positive impact of Emmaus communities.

Winners are then selected by an independent judging panel.

Speaking about the award, Christian said: “I was so shocked when my name was announced; I couldn’t believe it.

“The award means so much to me. The volunteer work I do is very exhausting but very rewarding. It’s a way to pay forward the kindness shown to me.

“I couldn’t do it each week without the help of my fellow Emmaus volunteers though – we all pull together because we know how it feels to be without a home; if we can help those who are sleeping rough, even a little bit, then it’s a job well done.”

Room to Reward was created to say thank you to “Hidden Heroes” – the inspirational people who go above and beyond in the name of charity.

Winners are awarded a two night bed and breakfast hotel stay for themselves and a guest at a choice of hotels throughout the UK and Europe.

He’s so passionate about supporting people sleeping on the streets and works hard to encourage others to join the Rucksack Stomp volunteer team.

It is fantastic that now his efforts have been recognised with an Emmaus Hidden Heroes Award.”

Emmaus Village Carlton supports 42 formerly homeless people by providing them with a home and work in a community setting.

The charity is one of 29 Emmaus communities across the UK, supporting more than 800 people who have experienced homelessness.

Anyone wishing to support the work of the Emmaus Village Carlton Rucksack Stomp can donate sleeping bags as well as warm clothing such as hats, gloves and scarves.

Supplies can be dropped off Tuesday to Saturday 9.30am – 4.30pm at the Emmaus Village Carlton reception building, School Lane, Carlton MK43 7LQ.

Tell us your coronavirus ‘lockdown’ experience

Four patients being treated for coronavirus at Bedford Hospital